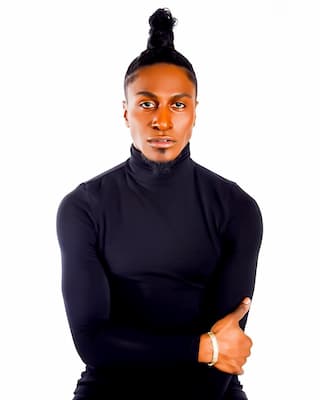 A native of Chicago, IL, Zayden Skipper is an American designer who became widely known after appearing on the 19th season of Project Runway.

From a very young age, Zayden has a strong interest in constructing and building things from nothing. It did not take him long to know that he wanted to become a designer.

Skipper is amongst the sixteen contestants on season 19 of the fashion design show, Project Runway. When asked what inspired him to try out for Project Runway, Skipper said;

“I just felt like it was time to introduce the world to “Zayden” with looks and moments I can bring to the runway.”

Speaking on his biggest challenge, Zayden revealed that it was being told “no.” Skipper also shared that as a black designer he has been told he is only good at “streetwear.” Zayden however, noted that his resilience and confidence in knowing who he is has kept him going.

When asked which of his qualities will set him apart from the competition, Skipper said; “I call B.S when I see it! I’m a realist and observant and laughing at all at the same time.”

He describes his design aesthetic as a vibe, a moment, and a look noting that he is not tied in one box. Skipper also shared that he does not follow trends and only admires fashion.

It is not yet known how old Zayden is. He is yet to share information about his age.

Although not much information is available about Zayden’s family, he revealed that his mother, aunts, and grandmother made him fall in love with fashion. He went on to describe these women as the epitome of beautiful Black women in fashion.

I am coming to do what the kids should have done but did not do.