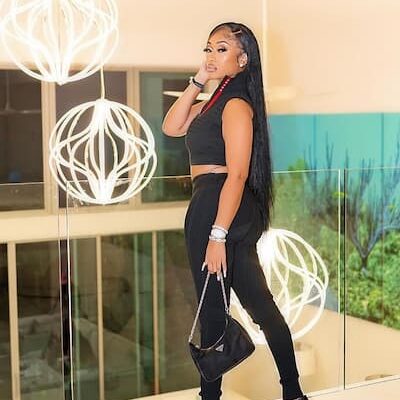 Yummy Yellow is an American model who is known as the girlfriend of Pop Smoke, the slain rapper and songwriter from New York City. Pop Smoke was killed on February 19, 2020.

Yellow is also a businesswoman. She runs a kids’ boutique that makes custom-made clothes for kids.  She is linked with the Perfect Silhouette Spa in New York City and is also a FashionNova affiliate.

Yellow’s age is not yet known. She is yet to share her date and year of birth.

Yellow is a mother to one beautiful daughter. She had the girl prior to being in a relationship with Pop Smoke. Her daughter is named Aaliyah and is 7 years old as of 2021.

Yellow has an estimated net worth of around $500k.

Yellow and Pop Smoke kept their relationship private. When he was alive, one knew who Pop Smoke was dating, and neither did he comment on his relationship status. After his death, his girlfriend, Yummy, came out to pay tribute to him via Instagram.

The tribute read; ” I’m a mother before anything but, a lover? Not so much. The more I get to thinking, I realize I tend to have a cold heart but, you melted mine so quickly. We taught each other self-awareness. He was rare. Never once did he try to change me.

“He was so resilient. Nothing could bend or break him. He made sense out of everything and if he didn’t understand, he would ask you questions, lots of em. He never ceased to amaze me with his honesty, I knew everything, I mean everything.

It went on to read, “He told me he never trusted a girl before but, he was willing. After a while, we explored each other day in & day out. Determined to find things out about each other that no one else knew. On V-Day, I was ecstatic cause u said I deserved my gift.

“You went on to say I kept u balanced and I said u kept me grounded! I longed for a pure transparent love like ours. U got that watch to let me know everything we want and desire was now in arm’s reach. Since Mid January U started moving super carefully with me. I can’t sit & say I wish I hugged u more before u walked out that door Monday cause I hugged u all night before that flight to Cali. Can’t even say we should of said I love u more that night/morning cause we said it over 20 times.

“U even came back after leaving the house & said “didn’t I say lock the door?,” with your 2 pigtails cause ya hair wasn’t braided over yet. Babe ur growth in everyday life & the industry was like nothing I’ve ever seen. Meet the Woo2 was ahead of it’s time.

“That’s not a mixtape. That’s an album! Do ya’ll kno he does all this music off the top? No pen, no pad, nothing!? Pop I love u. I adore u. You exceeded my expectations as a man. I tried to protect u from everything, u know that. For anyone who ever loved him, or still loves him, I understand. If you loved him, I love you. Whether its one girl that loves him or 800, he was loved in abundance, period!

“To all the fans that sent me literally thousands of dm’s, he loves yall & thank you! The sound & vibrations of yall when he hit that stage gave him life! His legacy & his name is not to be FUCD WITH! Pop, I won’t stop loving u! & I GOT U FOREVER💫 On everything, EVERYTIME they see me… Imma make sure they Woo.”