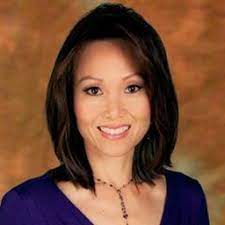 A native of the United States, Virginia Cha is a famous Korean American news anchor for KGTV-TV, San Diego. She was previously employed as an NBC News reporter based in New York and at HLN based in Atlanta.

Cha was born on 1st September in the United States. However, the exact year of birth of the KGTV-TV news anchor is not yet known to the public. As such, it is difficult to establish her actual age. She celebrates her birthday on every 1st day of September each year.

Any information regarding Cha’s educational background is publicly not known. We don’t know which high school or college she attended. We will update this section once the information is available.

Cha was born and raised by his parents in the United States. Nonetheless, our efforts to find out more about her family came to no avail as no such information is publicly available. Thus, the identity of cha parents is still unclear. It is also not known if she has any siblings. We will update this section once this information is available.

She is happily married to Edward. The partners emerged in one of Joey Fatone’s shows and displayed their favorite family recipes. Virginia was Miss Frederick when she entered and won Miss Maryland 1989 pageant. She was 1st runner-up to Debbye Turner at the 1990 Miss America pageant. She plays the piano.

As a news anchor in Boston and Hartford, where Cha started her on-air career, she acquired multiple local and regional awards, including multiple Emmy awards for anchoring and an Edward R. Murrow award for team political coverage.

Her knowledge spans a combination of formats from traditional anchoring to live shows from the field to a morning news program to in-depth medical reporting. She has been involved with a number of charity organizations, including Rosie’s Place, Boys and Girls Club, and First Night Boston.

Virginia is a news anchor for San Diego’s KGTV-TV. She started her career as a news anchor at WFSB in Hartford, Connecticut. She worked as a general assignment reporter, a substitute anchor, a head anchor, and finally a morning news reporter. Virginia has worked as an anchor at CNN/HLN and CNN.comLIVE in Atlanta, where she was based.

Additionally, during her time there, she covered everything from Hurricane Katrina to the 2008 elections,. She also covered Michael Jackson’s death and Osama bin Laden’s capture.

Furthermore, Cha worked for NBC News in New York as a network correspondent. She was at the forefront of several memorable stories, including the terrorist tragedy of September 11, 2001. Virginia was on the ground level when the North Tower fell, and she didn’t stop reporting from there for the next few weeks on the emotional recovery efforts.

Along with that, she was also present in Florida during the tense presidential election known as the “hanging chad.” From the earthquake destruction in El Salvador to the return of the China Spy Plane crew to the incredible Quecreek Mine rescue, Virginia has covered a wide range of breaking news items. Virginia’s reports aired on Nightly News, MSNBC, the Today Show, and Weekend Today, where she also served as an anchor. She has spoken with everyone from President Bill Clinton to Senator John McCain.