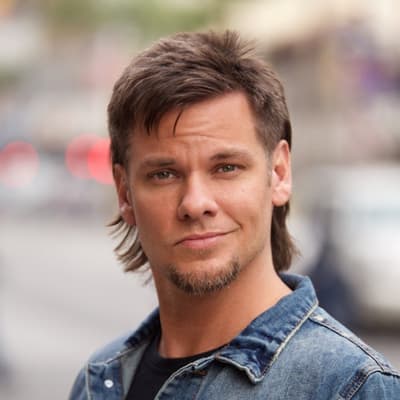 Theodor Capitani von Kurnatowski popularly known as Theo Von is an American stand-up comedian, podcaster, YouTuber, actor, and television personality. He hosts both This Past Weekend podcast and The King and the Sting podcast.

Theo stands at a height of 5 feet 10 inches (1.82 meters). He weighs about 89 Kgs. His hair and eyes are both dark brown in color. Further details about his body measurements will be updated soon.

Von was born in Baton Rouge, and raised in Covington, Louisiana. His parents are Gina Capitani and Roland Theodor Achilles von Kurnatowski. His father was 70 years old when Theo was born. He was originally from Bluefields, Nicaragua. Theo is of Italian, Irish, Polish and English descent. Theo has an older brother and two young sisters. At the age of 14, Theo was legally emancipated.

Von is not married and appears to be single.  The stand-up comedian is very discreet with his personal life therefore not much is known about his dating history. However, this information will be updated as soon as it is available.

Von began his career at the age of 19 when he starred in MTV’s Road Rules: Maximum Velocity Tour. He later appeared on MTV’s reality game show The Challange. In 2002, he appeared on Battle of the Seasons. In 2006 he took part in season 4 of Last Comic Standing. He won the online competition.

Von also took part in the Comedy Central sketch/competition show Reality Bites Back where he won beating various comedians including Tiffany Haddish and Amy Schumer. In 2011, he became the host of Yahoo online TV recap show Primetime in No Time. He later hosted Deal With It a hidden camera show on TBS.

He then started appearing on several tv shows including Inside Amy Schumer and Why? with Hannibal Buress. At the age of 23, Von mopved to Los Angeles to further pursue his career in stand-up comedy. In 2006, he won the title of Fan Favorite on the online competition aligned with season 4 of Last Comic Standing.

Von took part in five international tours for the USO. He performed at Guantanamo Bay. His comedy was featured on The Arsenio Hall Show, Hello Ross, Chelsea Lately, Watch What Happens Live, @midnight, and This Is Not Happening. His three-month national tour called The Dark Arts Tour took place in 2019.

Von has two podcasts called This Past Weekend and The King and The Sting. He started his first podcast The Comedy Sideshow in April 2011. He later started a weekly podcast with Matthew Cole Weiss called Allegedly with Theo Von & Matthew Cole Weiss. In December 2016, he started a new podcast called This Past Weekend. In December 2018, Theo started another podcast alongside comedian Brendan Schaub called The King and the Sting.

Von has an estimated net worth of $500, 000. He has been able to accumulate his net worth from his successful career as a stand-up comedian, podcaster, YouTuber, actor and television personality.