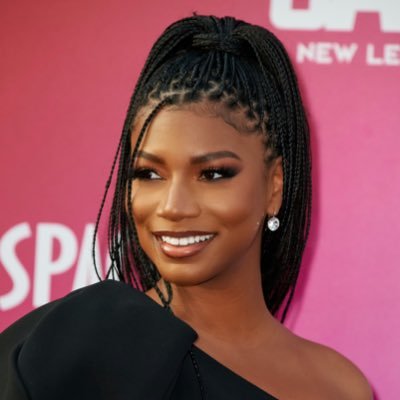 Taylor Rooks a native of Missouri, is an American sports journalist currently working for Bleacher Report and Turner Sports.

She was previously serving as a host, reporter, and correspondent at SportsNet New York. Rooks has previously worked for Big Ten Network and appeared on several programs including BTN Live, BTN Football Pregame, and Women’s Sports Report.

Rooks stands at an estimated height of 5 feet 9 inches and weighs about 59 Kgs. There are no further details about the sportscaster’s body measurements.

Rooks was born and raised in St. Louis, Missouri, United States. She was born into a family of athletes. Her father Thomas Rooks is a top rushing leader for the Illinois Fighting Illini.

Her mother’s name is Stephanie Rooks and her sister Ryan Rooks is a University of Georgia graduate, and a former swimmer and cheerleader. She is the niece of Lou Brock a St. Louis Cardinals Hall of Famer and Marv Woodson a former Pittsburgh Steelers and New Orleans Saints NFL player.

Rooks appears to be unmarried. She has, however, been in several relationships with celebrities including Jesses Williams, an actor, director, and producer known for his role as Dr. Jackson Avery in the tv series Grey’s Anatomy. Taylor has also been linked to NFL star Odell Beckham Jr. However, the two did not in detail describe the nature of their relationship.

Rooks graduated from Peachtree Ridge High School in Suwanee, Georgia in 2010. After graduating from high school, she joined the University of Illinois at Urbana-Champaign where her parents also went to.

She graduated with a degree in broadcast journalism. While in college, she covered and broke national football and basketball games. She also interned with Fox Sports/Scout.com, GA Tour, and Comcast SportsNet Chicago.

Taylor covered the national Illinois football and basketball games for scout.com from August 2012 to May 2014. While here, she cover a number of stories involving several layers including Cliff Alexander, Jalen Brunson, Quentin Snider, and Aaron Jordan. After graduating from collage, Rooks started working as an on-air host, reporter, and correspondent for the Big Ten Network.

She now regularly reports on Big Tens Games and hosts the Women’s Sports Report. In 2016, she joined SportsNet New York as a host, reporter, and anchor. She covered the 2016-2017 college football season for CBS Sports Network as a sideline reporter.

Being one of the best sportscasters working for Bleacher Report and Turner Sports, Rooks earns an estimated salary of $100, 000 annually.

Rooks has an estimated net worth of $1 million. She has created this impressive net worth from her successful career as a Sportscaster.