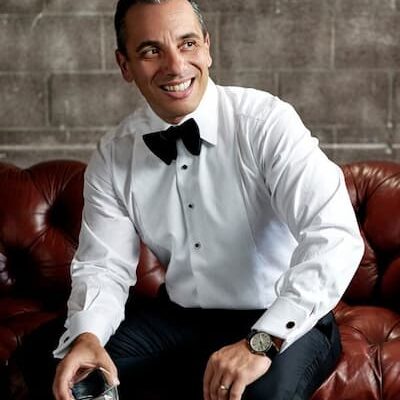 Sebastian Maniscalco a native of Arlington Heights, Illinois, is an American stand-up comedian and actor. He is best known for his five comedy specials including; Sebastian Live, What’s Wrong with People?, and Stay Hungry. He started his career in 1998. Sebastian has also appeared in multiple films like; Green Book 2018 and The Irishman 2019.

The stand-up comedian stands at a height of 5 feet 9 inches (1.8 meters). He weighs about 78 Kgs (171 lbs). His hair is black in color and has dark brown eyes. Further details about his body measurements as soon as they are available.

Sebastian was born and raised in the Chicago suburb of Arlington Heights, Illinois. He was born to his parents’ Italian immigrants. His father’s name is Salvatore Maniscalco immigrant from Cefalù, Sicily. He moved to the US at the age of 15. He was a hairstylist. His mother’s name is Rose Maniscalco. She was a secretary. Her family is originally from Naples, Campania, and Sicily. As an 8-year-old boy, Sebastian was an altar boy at St. Cecilia Catholic Church in Mount Prospect, Illinois.

Sebastian is happily married to his wife Lana Gomez. The two have been married for about 8 years now since August 2013. Their marriage has been blessed with two children a daughter Serafina named after Maniscalco’s grandmother and a son named Caruso. Serafina is 5 years old born in 2017. Caruso is 3 years old.

In October 2019, Sebastian bought his Beverly Hills home from singer and musician Gwen Stefani. The Beverly Hills Post Office estate was valued at $21.6 million. It features over 15,000 square feet of living space, a tennis court, and a separate guesthouse to mention a few. The house was initially owned by Jennifer Lopez then later sold to Sam Nazarian an entrepreneur in 2004. In 2006, he sold it to Gwen Stefani and her then-husband Gavin Rossdale.

Sebastian moved to Los Angeles in 1998. He started performing at open mics in bars and bowling alleys. He also worked as a waiter at the Four Seasons Hotel in Beverly Hills, California. In 2005, he became a regular performer at The Comedy Store in West Hollywood, California. As a comedian, he has been able to do a half-hour for Comedy Central Presents and five hour-long specials.

In addition, he has featured on Russell Peters’ Best Night Ever, Comedy Central Presents, The Late Late Show with Craig Ferguson, The Tonight Show with Jay Leno, The Jay Leno Show, The Tonight Show Starring Jimmy Fallon, and more shows. Aside from being a comedian, he has had several roles in films like; The Nut Job 2: Nutty by Nature, The House, Tag, and Cruise.

Sebastian co-hosts The Pete and Sebastian Show podcast alongside fellow comedian Pete Correale. They launched their show in January 2017 airing on Raw Dog Comedy channel 99. He made an appearance on the seventh season of Comedians in Cars Getting Coffee. His memoir Stay Hungry was published on February 27, 2018. On January 15, 2019, a Netflix special with the same title was released.

In 2018, he was featured in the film Green Book. He also hosted the 2019 MTV Video Music Awards. Sebastian made an appearance as “Crazy” Joe Gallo in Martin Scorsese’s The Irishman. He hosted the film’s three-part podcast called Behind the Irishman on December 2, 2019. Sebastian hosts the reality tv show Well Done With Sebastian Maniscalco. The show premiered on August 12, 2021. He joined the cast of Mario as Spike.

Maniscalco has an estimated net worth of $35 million as of 2021.