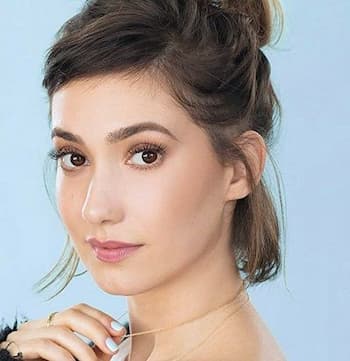 Schuyler Helford a native of California, is an American actress, writer, and producer. She is widely recognized for her role as Sateen in the television show Anger Management. She also plays the role of Brigitte in the tv series Call Me Kat. Her other acting credits include; Haunt as Mallory and The Middle as Chloe.

Helford is 5 feet 4 inches tall which is approximately 1.63 meters. She weighs about 56 kgs and her body measurements are 34-24-35 inches. Her dark brown hair is paired well with her dark brown eyes.

Helford was born and raised in Los Angeles, California. She was born to her parents Bruce Helford and Jan Corey Helford. She was born into an artistic family since her father is also a writer, actor, and producer. Her mum on the other side is the owner of Corey Helford, LA art Gallery. She was raised alongside her brother Aven Helford an artist and design graduate.

Helford is currently in a relationship with Josh Groban. Josh is a singer, songwriter, musician, actor, and record producer. The two started dating in 2017 and have been together for about 4 years now. There is no further information about their relationship.

Helford is best known for appearing in the tv series Anger Management as Sateen from 2013 to 2015. In 2016, she featured in the short film The Past Inside the Present. She has also appeared in the 2019 short film The Group Chart as Angela, and in the tv Mini-Series Indoorsy as Olive. She is also credited as a producer in the mini-series.

In addition, Helford has appeared in two sketch comedies; Security Check and Two Crucified. She is credited as writer and producer in the tv series #cybriety from 2015 to 2016. In 2018, she directed the short film Edited in which she also appeared as Audrey.

As of 2021, Helford has an estimated net worth in the range of $1 million – $5 million. It is through her successful career as a producer, actress, and writer that she has gained impressive wealth.