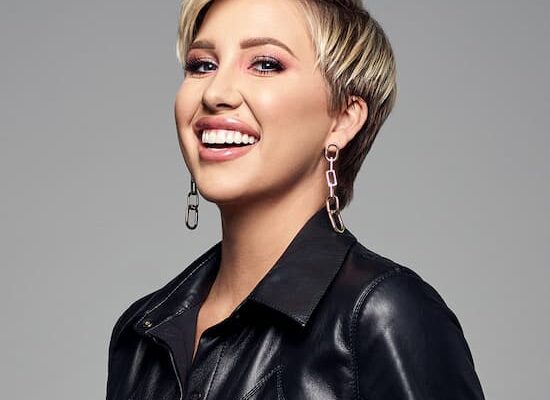 Chrisley stands at an average height of 5 feet 7 inches and weighs about 58 kgs. Her body measurements are 32-24-32 inches. Savanah has blond hair and blue eyes.

Chrisley was born and raised in Georgia, Atlanta. She was born to her parents Todd Chrisley a real estate tycoon and Julie Chrisley a tv personality.  Julie stars in the web series What’s Cooking With Julie Chrisley.  Her parents have been in previous marriages. Todd was previously married to Teresa Terry, his high school sweetheart. Julie was married to Kenneth her high school boyfriend. Todd and Julie tied the knot in 1996. Chrisley has four siblings; Lindsie Chrisley Campbell, Kyle Chrisley, Chase Chrisley, and Grayson Chrisley. Lindsie and Kyle Chrisley are from Todd’s first marriage.

Chrisley went to Lipscomb University in Tennessee but later transferred to Belmont University to pursue a career in the music business.

Chrisley had previously been engaged to pro hockey player Nic Kerdiles. Savannah and Nic two met on Instagram and officially started dating in November 2017. After one year of dating, Kerdiles proposed to her.  In September 2020, Savannah revealed that the two had broken off their engagement but are still on good terms.

Savannah has been in other previous relationships. Her most notable relationship was with country singer Blaire Hanks in 2015. The two met through one of Savannah’s brothers. Blake even appeared on Chrisley Knows Best when he went to meet her family. Savannah was also been in a relationship with NBA basketball player Luke Kennard in 2017.

Chrisley together with her family stars in the reality tv show Chrisley know Best. The show has a total of 8 seasons and airs on the USA Network. Its first episode was released on March 11, 2014.  The show initially took place in Roswell and Alpharetta. It was moved to Nashville, Tennessee on its fourth season. Chrisley stars on the show’s spin-off Growing Up Chrisley together with her brother Chase Chrisley.

Savannah is a former beauty pageant competitor. In 2016, she participated in the Miss Tennessee Teen USA which she won. She went ahead to participated in Miss Teen USA Pageant, however, she did not get to win the title. Chrisley was featured in the 2016 film Sharknado 4: The 4th Awakens alongside her father Todd Chrisley and her brother Grayson. Savannah is the founder and owner of a cosmetic company called SASSY.

In addition to being a tv personality, Chrisley is also a fashion designer. She released her first clothing line “Faith Over Fear” in 2017.  Hers second clothing line “Rampage x Savannah Chrisley” was released in 2019.

Chrisley has an estimated net worth of $500, 000. She has accumulated her net worth from appearing on the reality tv shows Chrisley Knows Best and Growing Up Chrisley. She also gets an income from her cosmetic company called SASSY.