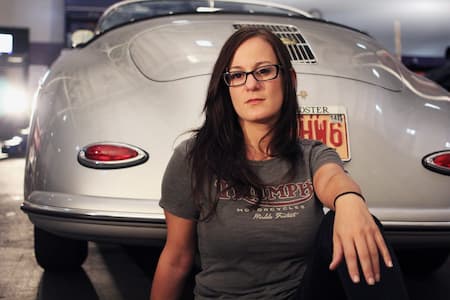 Lateiner, popularly known by her nickname Bogi, attended Oberlin College where she studied Law & Society and Women’s Studies. She later attended the Universal Technical Institute in Phoenix where she pursued mechanical studies.

Lateiner stands at an estimated height of 5 feet 6 inches,

There is no information available about Lateiner’s parents. IT is however known that she had an older sister named Jenni who died in an accident when Sarah was in college.

Lateiner is not yet married. She lives a very private personal life and it is therefore not known whether the amazing automobile mechanic is dating or is single.

Lateiner hosts the Automotive TV show All Girls Garage, a TV show on the now Motor Trend network.. The cast consists of Cristy Lee, Faye Hadley, and Rachel DeBarros. The show premiered on March 3, 2012, on Velocity.

“Come into the All Girls Garage and meet Bogi and Faye, a team of accomplished automotive technicians. Together they tackle everything from maintenance and performance upgrades to fabrication and engine swaps,” The All Garage website reads.

Lateiner’s first shop was 180 Degrees Automotive which she opened in 2006 in her driveway. “Built on the belief that car care should be easy, this shop is run by women, staffs virtually all women, and offers women-only monthly basic car care classes.

“Despite the success of 180 Degrees Automotive Bogi strives to stay true to her mission of encouraging the entry of women into the automotive industry, providing learning opportunities, and fostering connections between women of all ages and skill levels within the industry.

“This passion has led her to open her namesake shop, whose purpose is to provide an environment where newbies and experts can come together, commiserate, contrast, and collaborate in real-world, hands-on learning opportunities.”

Lateiner has an estimated net worth of around $3 million.