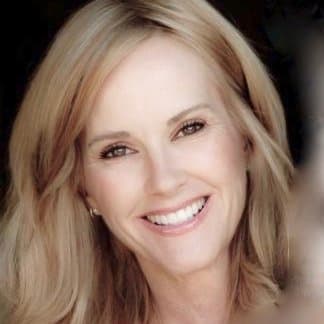 Rebecca Ann Staab is an American actress best known for playing the roles of Jessie Matthews in Guiding Light, Jenny in The Young Riders, Kristin in Seinfeld, Stephanie in Desperate Housewives, and Eileen Bruce in Chronicle Mysteries. She has also appeared in films like The Fantastic Four, The Marrying Man, and Breakthrough.

Rebecca stands at an estimated height of 5 feet 8 inches and is of moderate weight. Her eyes are brown in color paired well with her blonde hair. Further information about the actress’s body measurements is still under review and will be updated soon.

Rebecca was born in Hays, Kansas, and raised in Ralston, Nebraska. Information about her parents is not available. Rebecca has not disclosed much information about her family. She went to Ralston Senior High School. She competed and won the Miss Nebraska USA title in 1980. She also took part in the Miss USA 1980 pageant in Biloxi, Mississippi peaking at Top 12.

Rebecca is currently in a relationship with Canadian TV actor William DeVry. The two met back in 2007 and got into a relationship. They have been together ever since. Staab frequently posts pictures of them together on her social media accounts. There is, however, no further information about her past dating history.

Rebecca is best known for her appearances in movies and tv series including; Beverly Hills 90210, The Wonder Years, Seinfeld, Dharma & Greg, Columbo, NCIS, The Mentalist The Marrying Man, Love Potion No. 9, and The Fantastic Four. Prior to becoming an actress, Staab worked as a model for the Ford Agency. She made her television debut in 1985 when she appeared on Guiding Light. Rebecca has also appeared on several Hallmark Channel television films and series including Chronicle Mysteries.

Staab has an estimated net worth of $500, 000. She has been able to make her fortunes from her successful career as an actress.