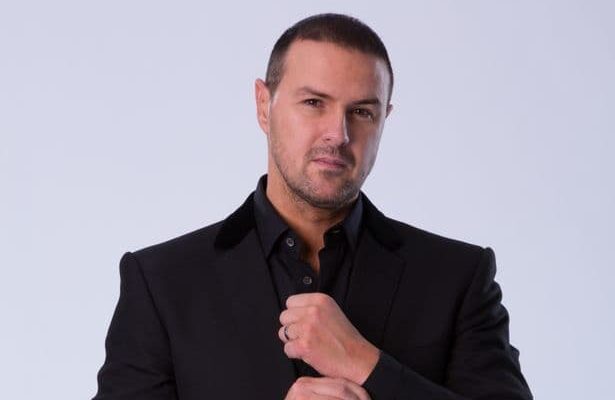 Patrick “Paddy” Joseph McGuinness is an English actor, television presenter, author, and comedian. He came into prominence after appearing on Peter Kay’s shows including; That Peter Kay Thing, Phoenix Nights, and Max and Paddy’s Road to Nowhere. He presents game shows on Channel 4, ITV, and BBC like Take Me Out and Top Gear. As of 2021, he presents the Question of Sport show.

The actor stands at a tall height of 6 feet 1 inch and weighs about 88 Kgs. For a 48-year-old, Paddy looks weigh young, energetic, and muscular. Further details about his body measurements will be updated as soon as they are available.

Paddy was born and raised in Farnworth, Lancashire, England. His parents are Irish from County Tipperary. His father’s name is Joe McGuinness. The actor has not disclosed further details about his family and siblings if he has any. Paddy went to Mount St Joseph High School where he met Peter Kay.

Paddy is married to Christine Martin. The two tied the knot on 4 June 2011. Martin is a reality tv personality born in Merseyside in 1988. The 33-year-old appeared on The Real Housewives of Cheshire. The couple has three children together; twins Penelope and Leo born in 2013 and Felicity born in 2016. Paddy’s children as well as his wife have Autism.

Paddy first appeared on God’s Gift in 1995. He went on to appear in Sky 1 show The Match. Paddy also became the host of Inside Wayne Rooney on Sky 1 on 15 May 2006. In 2016, he presented Stars in Their Cars on Travel Channel. In 2008, he co-starred in Rory and Paddy’s Great British Adventure on Channel 5.

Paddy guest-hosted The Paul O’Grady Show in November 2006. In 2012, he presented the tv series Hotel GB. In 2013, he presented Paddy’s TV Guide, and in 2015 presented Channel 4’s show Benchmark. Paddy was the host of the ITV dating show Take Me Out from 2010-2019. In addition, he hosted the comedy panel shows Mad Mad World and the talent show series Your Face Sounds Familiar in 2013.

Paddy presented BBC’s Paddy McGuinness’ Sport Relief Warm-Up. As of 2019, he co-hosts BBC’s show Top Gear. It was announced in July 2021, that Paddy will be the host of the BBC game show Question of Sport. His radio show on Bauer City 1 ran from 2014 to 2017.

As an author, he has written My Guide to the North: (and Scotland & Wales, oh, and less important places i.e. the South) released in September 2010. His autobiography My Lifey was released on 28 October 2021. Paddy played the role of Gary in Keith Lemon: The Film. In 2013, he became the brand ambassador of Pizza Hut.

paddy is the co-host of BBC’s tv show Top Gear. It was announced on 22 October 2018 that he would present the show. He started in 2019. In the show, the hosts take viewers through the specifications of the latest cars and bikes and also review the performance of the vehicles.

McGuinness has an estimated net worth of $10 million. He has garnered all his wealth from his successful career as an actor and television personality.