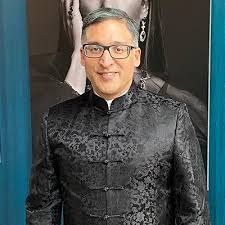 A native of Chicago, Illinois, United States, Neal Katyal is an American academic and lawyer. However, he is a partner at Hogan Lovells and the Paul and Patricia Saunders Professor of National Security Law at Georgetown University Law Center.

Katyal stands at a height of 5 feet 10 inches (1.78 m) tall. His weight is publicly not known. We will update this section once the information is available.

Katyal studied at Loyola Academy, a Jesuit Catholic high school in Wilmette, Illinois. He graduated in 1991 from Dartmouth College, where he was a member of Phi Beta Kappa, Sigma Nu fraternity, and the Dartmouth Forensic Union.

Katyal was born and raised in the United States on March 12, 1970, to immigrant parents initially from India. His mother is a pediatrician and his father, who died in 2005, was an engineer. Katyal’s sister Sonia is also an attorney and presently teaches law at the University of California, Berkeley School of Law.

Katyal is happily married to Joanna Rosen, a physician. His brother-in-law is Jeffrey Rosen, president and CEO of the National Constitution Center in Philadelphia. His sister Sonia Katyal is the Chancellor’s Professor of Law and co-director of the Berkeley Center for Law & Technology at UC Berkeley.

Katyal has an estimated net worth of $1.5 Million.

Katyal supported President Donald Trump’s nomination of Neil Gorsuch to the Supreme Court in an op-ed to The New York Times. When that newspaper’s public editor criticized the op-ed for failing to reveal Katyal had active cases being considered by the Court, he answered that it would have been obvious he always has cases being heard by the Supreme Court. Katyal formally introduced Judge Gorsuch at the Senate Judiciary Committee confirmation hearings.

In addition to Gorsuch, Katyal also spoke highly of President Trump’s nomination of Brett Kavanaugh to the Supreme Court. In multiple tweets that were cited by Republican Senate Majority Leader Mitch McConnell in favor of Kavanaugh’s confirmation, Katyal praised Kavanaugh’s “credentials hardworking nature”, and described his “mentoring and guidance” of female law clerks as “a model for all of us in the legal profession”.

Katyal has also portrayed Kavanaugh as “very gracious”, and “incredibly likable”. During a July 2018 panel on Kavanaugh’s nomination sponsored by The Heritage Foundation, a conservative think-tank, he commented: “It’s very hard for anyone who has worked with him, emerged before him, to frankly say a bad word about him.” Katyal’s comments in support of Kavanaugh were made before Christine Blasey Ford’s Senate Judiciary Committee testimony.

The US Justice Department awarded Katyal the Edmund Randolph Award, the highest honor the Department can bestow on a civilian. The National Law Journal named Katyal its runner-up for “Lawyer of the Year” in 2006 and in 2004 awarded him its Pro Bono award.