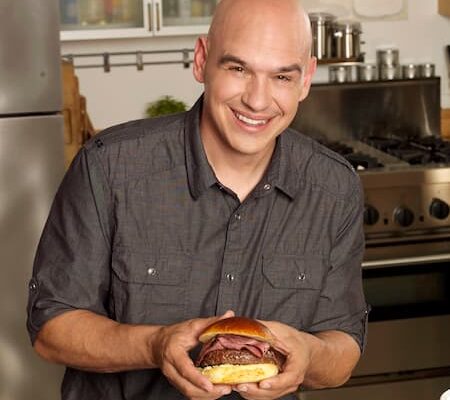 Michael D. Symon a native of Cleveland, Ohio, is an American, television personality, chef, restaurateur, and author. He is best known for appearing on various tv shows on Food Network including Iron Chef America, Burgers, Brew and ‘Que, Food Feuds, and The Best Thing I Ever Ate. He also appears on Cooking Channel’s show Cook Like an Iron Chef and ABC’s The Chew.

Symon has contributed to several periodicals including Bon Appétit, Esquire, Food Arts, Gourmet, Saveur and O, The Oprah Magazine. He is the owner of several restaurants around Cleveland including Lola, Mabel’s BBQ, and the burger franchise BSpot.

The tv-personality stands at an average height of 5 feet 11 inches. He is of moderate weight. However, further details about his body measurements are not yet disclosed.

Symon was born in Cleveland, Ohio, and raised in North Olmsted. His parents are Angel Symon and Dennis Symon. He has a sibling named Nikki Symon. He is of Greek, Italian, and Eastern European ancestry.

Symon is happily married to his wife Liz Shanahan Symon. Liz has been working with Michael in his restaurants since they got married. The two got married on November 1, 1998. Michael met his wife while he was working at his restaurant. Symon is the stepfather of Liz’s son Kyle. Kyle was only two years when Symon and Liz met.

Michael as one step-sop kyle Symon. Kyle is Liz’s son from her previous relationship with Kyle’s dad. The biological father’s name and further information are not disclosed yet. Liz and Michael met when Kyle was only 2 years old. Kyle who shares a special bond with his step-dad has also followed in his steps and became a chef and restaurateur. Symon married Liz on November 1, 1998.

The chef started his career at Player’s, a Mediterranean restaurant in Lakewood. He later moved to Piccolo Mondo as a chef, then moved to Caxton Cafe. He opened his famous restaurant Lola in February 1997 alongside his wife. Gourmet magazine named Lola was one of America’s Best Restaurants in its October 2000 issue. Lola was later converted to Lolita in 2005. In 2006, Symon reopened Lola in Cleveland.

His third restaurant Parea was opened on April 15, 2006, in New York. His partners were elly Hatzigeorgiou, George Pantelidis, and Peter J. Pappas. The restaurant was managed by Jonathon Sawyer who tutored and worked under Michael at Lolita. The restaurant was listed “100 Tastes to Try in ’07” in Food & Wine magazine. After it closed down in 2007, Stavros Aktipis acquired it and renamed it Kellari’s Parea.

In 2008, Symon opened Roast in the Westin Book Cadillac Hotel in Detroit, Michigan. In 2009, it was named Restaurant of the Year by the Detroit Free Press. He opened Bar Symon in Avon Lake, Ohio on July 1, 2009, and later BSpot his hamburger franchise in Woodmere, Ohio. Symon started to contribute menu items in 2009 being prepared by foodservice firm Aramar at the Quicken Loans Arena.

Symon closed down Bar Symon located in Avon in 2010. In 2011, he closed down two more BSpot locations in Strongsville and Westlake. In May 2012, he opened a new BSpot at the Horseshoe Casino Cleveland which was later closed in 2017. Another Bar Symon was opened on June 25, 2012, in Pittsburgh International Airport-Airmall. Symon’s Burger Joint in Austin, TX on November 21, 2015.

Symon opened a new restaurant called Mabel’s BBQ on April 11, 2016, and later a second one at the Palms Casino Resort in Las Vegas on December 20, 2018. In May 2017, Symon opened both Bar Symon in Cleveland Hopkins International Airport in Concourse C and Angeline at the Borgata Hotel Casino & Spa in Atlantic City.

Symon has appeared on numerous Food NetWork’s tv shows. He was a rotating host in the show Melting pot. Symon also appeared on Sara’s Secret, Ready, Set, Cook, and Foodnation with Bobby Flay. He made an appearance on Iron Chef America and in the “Cleveland, OH” episode of Anthony Bourdain: No Reservations.

Symon was a contestant on the reality competition TV series The Next Iron Chef. He won his first battle on Iron Chef America on November 11, 2007. In April 2008, he became the host of Food Network’s Dinner: Impossible. He has also appeared in Dear Food Network: Thanksgiving Disasters, The Best Thing I Ever Ate, Cook Like an Iron Chef, and Food Feuds.

He featured in a skit on the late-night talk show Conan on February 14, 2011. The same year, Michael began co-hosting The Chew on ABC networks. He has been hosting the tv series Burgers, Brew, and ‘Que since 2015.

In 2001, Symon featured in Michael Ruhlman’s book The Soul Of a Chef: The Journey Toward Perfection. His first book Michael Symon’s Live to Cook: Recipes and Techniques to Rock Your Kitchen was published in 2009 of which he collaborated with Ruhlman. He co-authored “The Chew: Food. Life. Fun” alongside Mario Batali Gordon Elliott, Carla Hall, Clinton Kelly, and Daphne Oz. The book was published in 2012.

“Michael Symon’s Carnivore: 120 Recipes for Meat Lovers” was written by Symon and food writer Douglas Trattner. In 2012, the Chew Crew began releasing seasonal e-book cookbooks. The Chew: Fall Flavors: More than 20 Seasonal Recipes from The Chew Kitchen was then published. In December 2012, The Chew: Winter Flavors was released. In 2013, The Chew: What’s for Dinner, The Chew: Spring Flavors, and The Chew: Summer Flavors were released.

Symon’s other cookbooks are 5 in 5: 5 Fresh Ingredients + 5 Minutes = 120 Fantastic Dinners, 5 in 5: 5 for Every Season, Michael Symon’s Playing with Fire, and Fix It with Food all co-authored by Douglas Trattner. Symon has partnered with multiple products including kitchenware company Weston Products, Vitamix, and Calphalon.

Symon has an estimated net worth of $6 million which he has garnered from his career.