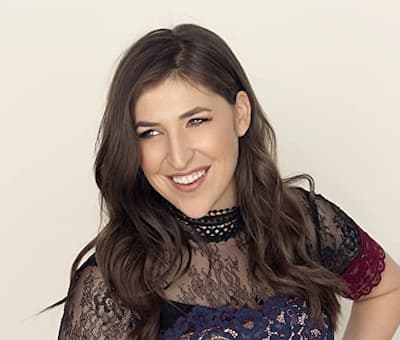 Mayim Chaya Bialik is an American actress, author, and television personality. She is best known for playing the lead role in the tv show Blossom on NBC from 1990-1995. She is also widely known for her role as neuroscientist Amy Farrah Fowler on the CBS sitcom The Big Bang Theory.

Mayim stands at an approximated height of 5 feet 4 inches ( 1.63 meters ). There are no further details about her body measurements.  However, these details will be updated as soon as they are available.

Chaya was born and raised in San Diego, California. Her parents are Barry and Beverly Bialik. She was born into a Jewish family who lived in The Bronx, New York City. Three of her four grandparents are from Hungary, Czechoslovakia, and Poland. Mayim considers herself a Modern Orthodox Jewish even though she was born a Reform Jew. Her name Mayim means water in Hebrew. The name originates from her great-grandmother Miriam. Her great-great-grandmother’s Uncle was Poet Hayim Nahman.

Bialik was previously married to Michael Stone. The two tied the knot on August 31, 2003. Their wedding ceremony was Victorian-themed and had traditional Jewish wedding customs. Bialik and Michael have two sons. However, there is not much information regarding their sons. The two divorced in November 2012. She later got into another relationship, however, in 2018, she announced that the relationship was over after 5 years.

After graduating from North Hollywood High School in 1993 she was accepted into the University of California, Los Angeles. She graduated in 2000 with a Bachelor of Science degree in neuroscience, with minors in Hebrew and Jewish studies. In 2005, she took a break from school and decided to go back to acting.

In 2007, she earned her Doctor of Philosophy degree in neuroscience from UCLA. Her research project was an investigation of hypothalamic activity in patients with Prader-Willi Syndrome. The project was titled “Hypothalamic regulation in relation to maladaptive, obsessive-compulsive, affiliative, and satiety behaviors in Prader–Willi syndrome.”

Mayim started off as a child actress. In 1988, she appeared in the film Pumpkinhead. She made more appearances in The Facts of Life, and Beauty and the Beast. Chaya played Frieda in the tv sitcom Webster. She earned her Screen Actors Guild after playing the role of Ellie in Beauty and The Beast. Mayim has also featured in the music video for Michael Jackson’s song “Liberian Girl”.

Her most notable role is in the tv show Blossom from 1990 to 1995. Bialik was a contestant on an episode of the second season of the game show Where In The World Is Carmen Sandiego? on PBS. Bialik has also provided her voice on multiple cartoons including; The Real Adventures of Jonny Quest, Disney’s Recess and Kim Possible, Cartoon Network’s Johnny Bravo, and Nickelodeon’s Hey Arnold!.

She played the recurring role of a high school guidance counselor in ABC Family’s The Secret Life of the American Teenager. Mayim joined the cast of The Big Bang Theory in 2010 in the finale episode of season three. She became a permanent character in the show in season 4. In 2014, she guest-starred on Steve Carell’s improvisational sketch show Riot.

She became a show host of Candid Camera on TV Land alongside Peter Funt in 2014. Mayim has her own productions called Sad Clown’s Productions. In 2019, she announced that she had signed exclusive contracts with Warner Bros.Entertainment. Bialik stars in the tv show call Me Kat as the lead character Kat. The show premiered on January 3, 2021, and its second season was renewed in May 2021.

Mayim is the founder of Grok Nation which was originally a platform for facilitating conversations among people. It was relaunched in 2018 as a women’s lifestyle site. Bialik has co-authored two books alongside Jay Gordon titled Beyond the Sling and Mayim’s Vegan Table which contains more than 100 vegan recipes. Her other two books are Girling Up (2017 ) and Boying Up ( 2018 ).

In addition, Bialik has written and directed her first film titled As Sick As They Made Us. The film was set to premiere in late 2020 but was postponed due to covid 19. The film, which is about a divorced mom juggling her family’s needs and her own quest for love stars Dustin Hoffman and Candace Bergen.

Mayim started guest-hosting Jeopardy on May 31, 2021. It was later announced on August 11, 2021, that she will host future primetime specials and spinoffs and then became a guest-host for three weeks after Mike Richard resigned from the Show.

The Big Bang Theory actress has an estimated net worth of $25 million. She has created her net worth from her long career as an actress. She has featured in multiple movies and tv shows including; Call Me Kat, Blossom, Lloyd in Space, Recess, Beaches, and Pumpkinhead.