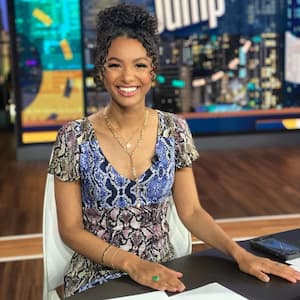 A native of Oakland, California, Malika Andrews is an American reporter and sports journalist for ESPN serving as the host of NBA Today.

Andrews attended Head-Royce School where she was kicked out when in eighth grade. She later joined a year-round therapeutic boarding school in Utah.

After graduating high school at the age of 17 years, Malika joined the University of Portland, where she pursued a degree in communications.

Andrews joined ESPN in October 2018 as an online NBA writer. She made her debut as the network’s youngest sideline reporter for a broadcast during the 2020 NBA Bubble.

In 2021, Malika was named one of the Forbes 30 Under 30 in the sports industry being the network’s only black female NBA reporter. So, how did Malika get into the NBA world? For that information, let’s take a trip some years back.

In 2017, Malika introduced herself at an NBA Summer League game to ESPN’s Adrian Wojnarowski, who had read her work at The Beacon. She would go-ahead to have an internship at the Denver Post.

Andrews also worked as a James Reston Reporting Fellow in the sports department at The New York Times. She additionally, worked as a reporter for the Chicago Tribune for one year.

Andrews eventually joined ESPN.com in 2018 as a reporter covering the Chicago Bulls and Milwaukee Bucks. She later moved to New York to cover the New York Knicks and Brooklyn Nets.

She was in 2020, one of the first reporters to enter the ESPN Wide World of Sports Complex for the completion of the 2019–20 NBA season in the Bubble. Malika led the 2020 NBA draft telecast with virtual interviews of the top draftees.

Andrews was on July 6, 2021, announced as ABC’s sideline reporter for the NBA Finals coverage. She was taking over for Rachel Nichols, who was removed after audio was leaked; of Nichols disparaging the network’s promotion of analyst Maria Taylor. This was after Maria was promoted as the primary host of the Finals.

Andrews is the daughter of Mike and Caren. Her father is a personal trainer while her mother is an art teacher. Malika’s maternal grandfather owns a civil rights law firm. She worked at the firm for a year before joining the university.

Andrews has a younger sister named Kendra Andrews who is also a sports journalist and reporter. She covers the Golden State Warriors for NBC Sports Bay Area.

Andrews is not married. She also does not share information involving her romantic life with the public. There is no known information about any of her previous relationships either.

Andrews is of Jewish descent through her mother. She had a bat mitzvah ceremony in 2008.

Malika Andrews Salary and Net Worth

Andrew’s salary at ESPN is said to range around $75.7k every year. This information is however not verified. She has an estimated net worth of around $1 million.