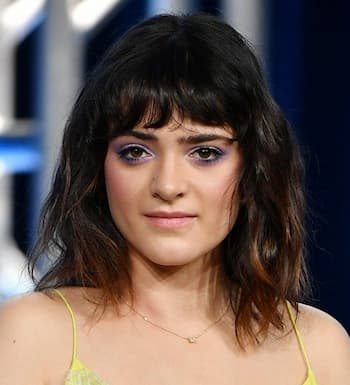 Luna Blaise a native of California is an American actress, singer, and social media star. She is best recognized for her role as Olive Stone in NBC’s supernatural drama television series Manifest. She is also very well known for playing the role of Nicole in ABC’s tv series Fresh Off the Boat.

The actress stands at an estimated height of 5 feet 5 inches (1.65 meters) and weighs about 51 Kgs ( 112 lbs). Her chest, waist, and hips measure 32A, 24 inches, and 34 inches respectively. She has black long hair and beautiful dark brown eyes.

Luna was born and raised in Los Angeles, California. Her parents are paul Boyd a well-known director from Glasgow, Scotland, and Angelyna Martinez-Boyd a Mexican-American actress from San Antonio, Texas. There is no further information about her siblings if she has any.

The 20-year-old actress appears to be currently single. She has not disclosed any information about her dating life, therefore, her dating history can not be determined. Despite being a famous actress and a social media personality, Luna prefers to keep some of her personal information discreet.

Blaise and Loren Gray used to be great best friends, however, their friendship turned sour and the two broke up. Loren is an American social media personality, model, and singer born and raised in Pottstown, Pennsylvania. She came to the limelight after sharing her lip-syncing videos on Tik Tok.

The 20-year-old actress has a striking resemblance to American entrepreneur and socialite Kylie Jenner. The two, however, are not related in any way and do not even personally know each other. Besides, Luna has Hispanic roots. Her mother is a second-generation Mexican-American.

As a singer, Blaise released her first single “Over You” in 2017. In December 2017, she announced that she would be releasing new music. Her second single “Secrets” was released in late 2018. Blaise appeared in the music video of Jacob Sartorius’ debut single “Sweatshirt” in 2016.

Luna Blaise Fresh Off The Boat

Luna landed the recurring role of Nicole in the ABC sitcom television series Fresh Off the Boat. This was her first major role. The tv series premiered in February 2015. The show follows a family of five Asian Americans played by Randall Park, Constance Wu, Hudson Yang, Forrest Wheele,r, and Ian Chen. After being released, the tv show became the first network tv sitcom to star a family of Asian Americans in the U.S.

Blaise has an estimated net worth of $500, 000 which she has garnered from her fast-rising career as an actress.