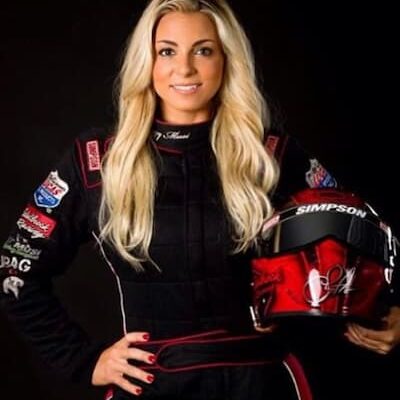 Lizzy Musi a native of New Jersey, is an American professional car racer and reality tv personality. She appears on the reality tv show Street Outlaws: Gone Girl. She is also known as the daughter of award-winning race driver Pat Musi. Musi was the first woman to win in Pro Nitrous.

The car racer stands at an average height of 5 feet 9 inches and weighs about 64 kgs which is approximately 141 lbs. On to her body measurements; her breast measures 35 inches, her waist is 25 inches, and her hips measures 34 inches. She has beautiful brown eyes and blond hair.

Musi was born in New Jersey where she was also raised. She was born to her father an award-winning race driver Pat Musi and her mother Elizabeth. Her father has a track record of eight street World Championships competitions. He is also the owner of an engine-building garage called Pat Musi Racing Engines located in Mooresville, North Carolina. Her sister Patricia Musi is also a race driver.

Lizzy is currently in a relationship with Kye Kelley, a drag racer and television personality. The two have been dating since 2017. Their first meeting was at a PDRA exhibition race. Lizzy’s father was the one who introduced them to each other and they instantly became good friends. The year they started dating, was the same year that Kye got divorced from his first wife Alisa Mote. Kye and Alisa were married from 2015 to 2017 and have a daughter named Kenadeigh Alexa Kelley. Kye also appears on Street Outlaws.

Musi stars in the new reality show Street Outlaws: Gone Girl airing on the Discovery channel. The show premiered in September 2021. The show features seven of the fastest female car racers as they compete in the street racing for a chance to win a grand prize. The other cast members including; Tricia Day, Precious Cooper, Armani Johnson, Chelsea, and Courtney Anton.

Musi gained her passion for car racing at a young age considering that she comes from a family of racers. She got her experience from her father Pat Musi an awarding winning race driver. Growing up, she worked at his engine building garage called Pat Musi Racing Engines.  She had her first junior drag race at the age of 16 in 2007. In 2014, she made her Pro Nitrous race debut.

In 2018, Lizzy got into an accident at the Northstar Dragway in Denton, Texas. In the accident, she wrecked a 1968 Chevrolet Camaro. It’s reported that the car belonged to her boyfriend and she was only taking it for a test drive. Fortunately, she was not injured.

Musi has an estimated net worth of $500, 000 which she has acquired from her successful career as a pro racer and tv personality.