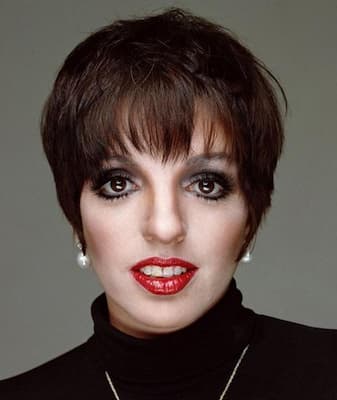 A native of California, Liza Minnelli is an American actress, singer, and dancer; the recipient of an Emmy, Grammy, Oscar, and Tony (EGOT).

Liza began her musical career as a musical theatre actress, nightclub performer, and traditional pop music artist in 1961. In 1963, she made her professional stage debut in the Off-Broadway revival of Best Foot Forward and won a Tony Award for starring in Flora the Red Menace in 1965.

In 1961 she moved to New York City, where she joined the High School of Performing Arts. She later went to Chadwick School.

Liza was born at Cedars-Sinai Medical Center on Beverly Boulevard in Los Angeles to  Judy Garland and Vincente Minnelli. Her parents named her after Ira Gershwin’s song “Liza (All The Clouds’ll Roll Away)”.

Liza has a half-sister called Lorna and a half-brother called Joey. She also has another half-sister, Christiane Nina Minnelli (nicknamed Tina Nina), from her father’s second marriage.

From December 4, 1979, to January 1992, Liza was married to Mark Gero, a sculptor, and stage manager. Her fourth marriage was with David Gest, a concert promoter. The couple tied the knot on March 16, 2002, but later separated in July 2003 and got divorced in April 2007. In a 2003 lawsuit, David alleged that Liza beat him in alcohol-induced rages during their marriage. Liza was also linked up with Rock Brynner.

After a serious case of viral encephalitis in 2000, doctors predicted that Liza would spend the rest of her life in a wheelchair and perhaps not be able to speak again. However, taking vocal and dance lessons daily (especially with Sam Harris, Luigi Faccuito, Ron Lewis, and Angela Bacari), she managed to recover.

Liza appeared on a September 19, 2001, episode of The Rosie O’Donnell Show, notable because it was Rosie’s first show back following the September 11 attacks. Despite having vocal surgery shortly prior, she sang her signature song, “New York, New York”, and received an enthusiastic ovation.

Liza has made a great fortune from her career. She has an estimated net worth of $50 million.