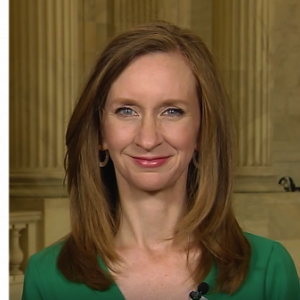 A native of Hawaii, United States, Lisa Desjardins is a well-known American political journalist. However, she is a correspondent at PBS NewsHour and has previously worked for the Associated Press and CNN Radio.

Desjardins is 50 years old as of 2022. She was born on 29 January 1972 in Hawaii, United States. She celebrates her birthday on 29 January every year.

Desjardins stands at a height of 5 feet 6 inches (1.68 m) tall. She has not revealed her weight or body measurements but we shall update this as soon as the information is available.

Desjardins was born and raised in Hawaii, United States by her loving parents.is the daughter of a Naval officer. Details about her mother and father are few, however, her father worked as a college instructor later in her life. She was raised alongside three siblings in Annandale, moreover, she has seven half-siblings.

Desjardins is happily married to her husband Jason Desjardins. The couple got married in 2007 and are parents to one child. They welcomed their baby son in 2016 and are expected to adopt another child. The family currently lives in Alexandria, Virginia. Lisa’s husband has maintained a low profile and very little is known about him.

Desjardins has an estimated net worth of $2 million

Desjardins started her journalism career in Myrtle Beach, South Carolina where she operated between 1998 and 1999. She was fired from WBTW, however, she did not share the reasons for her cessation. She thereafter worked as a freelance reporter for The Sun News and for Reuters. Desjardins joined WIS in 1999 where she worked as a political reporter.

Among her notable works at WIS are when she covered the 2000 Republican presidential primaries among other top political stories. She also served as a reporter for Associated Press based in the Washington, D.C. bureau until April 2003. In Washington, she covered all the compromises in the Confederate flag debate, the Iraq War, and the 2004 presidential election.

She joined CNN in 2005 from Associated Press and worked as a senior correspondent and Capitol Hill reporter. Additionally, she served as CNN Radio’s Congressional correspondent and CNN.com correspondent until 2014. While at CNN, she reported on the 2010 Haiti earthquake which earned her a Sigma Delta Chi Award, the 2008 presidential primaries which also won CNN the Peabody Award, among others.

She joined PBS NewsHour in 2014 as a political correspondent, however, she was promoted to serve as a Political Director in July 2015. Moreover, Desjardins author of the PBS NewsHour website.