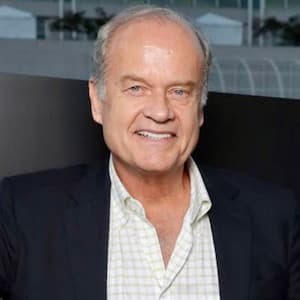 Allen Kelsey Grammer is an American actor, producer, director, and writer. He is best recognized for his role as psychiatrist Dr. Frasier Crane on the NBC sitcom Cheers and its spin-off Frasier. He earned four Primetime Emmy Awards and two Golden Globe Awards for his role.

His role as Mayor Tom Kane in the tv series Boss earned him a Golden Globe Award. Grammer has also appeared in The Last Tycoon. He provided his voice for Sideshow Bob in The Simpsons. Grammer has also performed on Broadway. He starred in the 1983 Stephen Sondheim’s Sunday in the Park with George at Playwrights Horizons, Off-Broadway.

Kelsey stands at an estimated height of 6 feet 1 inch. He weighs about 90 Kgs. His blue eyes go perfectly together with his light brown hair. Further details about his body measurements will be updated soon.

Kelsey was born in Saint Thomas, U.S. Virgin Islands. He was born to Sally and Frank Allen Grammer. His mother was a singer and actress while his father was a musician and owner of a coffee shop and a bar and grill called Greer’s Place. His maternal grandparents are Gordon and Evangeline Cranmer.

He was raised by his mother and maternal grandparents after the death of his father in a home invasion in 1968. His grandfather died of cancer. Kelsey’s sister was kidnapped, raped, and murdered in Colorado Springs in 1975. After five years, his two teenage half-brothers died in a scuba diving accident in 1980.

On July 1, 1975, Kelsey’s younger sister, Karen Grammer who was 18 years old then was abducted, raped, and murdered by Freddie Glenn, Michael Corbett, and one other man. Kelsey was able to identify her body. Kelsey was very close to his sister and her death left him devastated. Karen’s murder which was investigated by the Colorado Springs Police Department was featured in the episode “Animal Nature” of the Investigation Discovery series Homicide Hunter. Kelsey named his daughter after his sister; Spencer Karen Grammer.

Kelsey has been married four times. His first marriage was to dance instructor Doreen Alderman in 1982. They separated in 1984 and finalized their divorce in 1990. They share a daughter actress Spencer Grammer. Spencer has a son Emmett Emmanual Hesketh born on October 10, 2011.

After his divorce, he got into a relationship with hair and makeup stylist Barrie Buckner and had a daughter Kandace Greer Grammer. In 1992, he married Leigh-Anne Csuhany. In 1993, when she was three months pregnant, Grammer filed for an annulment.

Kelsey started a relationship with Tammi Alexander in 1994. His third marriage was to dancer and model Camille Donatacci in 1997. They divorced on February 10, 2011. Kelsey married his current wife Kayte Walsh on February 25, 2011. Kelsey has seven children.

Grammer started his acting career acting on stage. He had a three-year internship with the Old Globe Theatre in San Diego. In 1981, he made his Broadway debut as “Lennox” in Macbeth. He went on to play Michael Cassio in a Broadway revival of Othello. Kelsey originated the roles of Charles Frohman and Captain Hook in the Broadway premiere of the musical Finding Neverland.

In 1984, Kelsey joined the cast of NBC sitcom Cheers as Dr. Frasier Crane. He reprised his role in the show’s spin-off Frasier. He also directed more than 30 episodes of the show. Grammer has also provided his voice on The Simpsons as Sideshow Bob. In 1995, Grammer provided his voice for Dr. Frankenollie in the Mickey Mouse short Runaway Brain. He has also voiced multiple animated tv series including; Barbie of Swan Lake, Bartok the Magnificent, and Gary the Rat.

In 2005, Grammer appeared in the American adaptation of the British show The Sketch Show which he also produced. He later starred in the American sitcom Back to You. Grammer played the role of Mayor Tom Kane in the Starz drama series Boss. Grammer guest-starred in NBC’s show 30 Rock. In addition, Grammer has been featured in multiple commercials like; Honey Nut Cheerios and Hyundai.

Kelsey is best known for his portrayal of psychiatrist Dr. Frasier Crane on the NBC sitcom Cheers. The show was created by James Burrows. It premiered on September 30, 1982. The show’s last episode aired on May 20, 1993. He played the same role on the show’s spin-off, Frasier.

Grammer has an estimated net worth of $80 million.