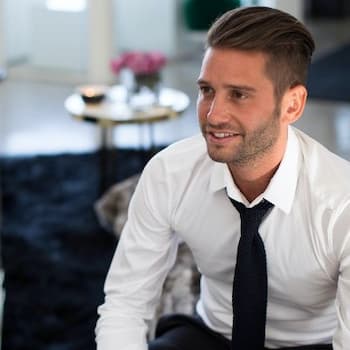 A native of Los Angeles, Joshua Daniel Flagg is an American real estate agent, author, and tv personality. He is also a regular contributor to several real estate publications and news outlets. He is one of the original cast members of the reality tv show airing on Bravo.

Flagg has been featured on multiple tv programs including; NBC’s Today Show, ABC’s Good Morning America, E!, CBS The Insider, Fox, and Bravo’s Watch What Happens: Live. In addition, Josh has been recognized as one of the top-ranked agents in California by The Wall Street Journal and top 25 real estate agents by The Hollywood Reporter.

The real estate agent stands at an average height of 5 feet 8 inches (1.78 meters). He weighs about 73 Kgs (163 lbs). On to his body measurements, the details are not yet available and will be updated as soon as they are.

Flagg was born and raised in Los Angeles, California. His parents are Michael and Cindy Flagg. His grandfather was Herman Platt, a philanthropist, electronics industry executive, and Jewish leader. Flagg’s great-grand Benjamin Platt was the founder and owner of the nationwide Platt Music Corporation chain of stores. His paternal grandmother Edith Flagg was a Romanian fashion industry executive and designer.

Flagg is openly gay and is happily married to his husband Bobby Boyd. The couple tied the knot on September 10, 2017, at the Beverly Hills Hotel, after their engagement that took place in July 2016. Flagg proposed to Boyd during a flash mob at the Four Seasons Hotel George V. The married couple lives in Beverly Hills.

One thing that Flagg and his husband Bobby love is decorating their house for the Christmas Holidays. The two live in Beverly Hills in their dream home that looked nothing short of dreamy last Christmas. From lights, poinsettias to large ornaments, and ofcourse a beautiful Christmas tree. One more holiday that Flagg and his husband love is the Halloween. The two go out of their way to decorate their house with creepy ornaments.  The two love birds went on social media to share posts of their beautiful decorations.

Flagg went to Brentwood School, a private school based in Brentwood, Los Angeles. He later transferred to Beverly Hills High School in 2003. He graduated in 2004.

Flagg started his career as a real estate agent when he was only 18 years old while still in high school. He worked under real estate broker Bruce Nelson who worked with the John Bruce Nelson firm in Bel Air. In 2007, he briefly worked at the Coldwell Banker Beverly Hills East office. Flaggs has made many notable record sales. Some of the sales include; highest sale in the history of Brentwood Park and the Beverly Hills $25 million residential sales.

In addition, he has done listing for several estates including Merv Griffin’s Bel Air estate and the Dorothy Chandler Estate in Hancock Park, and sold houses for a number of celebrities like Steve Aoki, Shonda Rhymes, Adam Levine, and Tom Ford. He started his own company “Josh Flagg Estates” while still working at Keller Williams Westside in Los Angeles.

Flaggs would later start working with Rodeo Realty. In 2006, he joined the original cast members of the reality tv show Million Dollar Listing Los Angeles. The other real estate agents are Madison Hildebrand and Chad Rogers. The show premiered in August 2006 on Bravo Tv. Flagg launched his own mobile phone app called Star Maps. The app is a directory of properties owned by celebrities in Los Angeles.

Flagg is a recipient of the Next Generation award from the Los Angeles Museum of the Holocaust. He was presented the award by Melissa Rivers in 2013.

Flagg has an estimated net worth of $40 million which he has accumulated from his career as a real estate agent and reality tv personality.