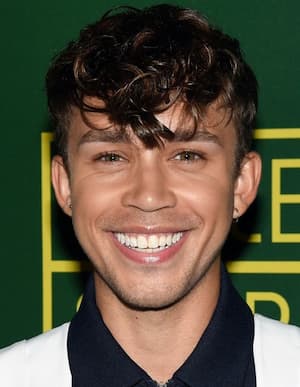 Born and raised in Los Angeles, Jeremy McClain is an American actor, singer, and model best known for portraying the character of Cubby Wintour in all of the three seasons of the FX series Pose. He has also appeared in the tv series First Wives Club and the 2020 film Someone, Somewhere.

For a model, Jeremy stands at a tall height of 5 feet 9 inches. His height goes perfectly with his body size. There are no further details about his body measurements. However, these details will be updated soon.

McClain was born and raised in Los Angeles, California, United States Of America. Information about his parents is still under review. The actor has preferred to keep some of his personal information away from the public.

McClain is openly gay.  He is happily married to his husband Nicholas p. Elliott. The two dated for a long time before they finally exchanged their vows on November 30, 2014. There is no much information about the couple’s marriage or if they are planning to have children.

McClain played the role of Cubby Wintour in the first, second and third seasons of the famous FX series Pose. The show’s original release date was on June 3, 2018. Jeremy starred alongside great actors including; Billy Porter, Hailie Sahar, Indya Moore, and Dominique Jackson.

Aside from playing the role of Cubby Wintour in FX’s series Pose, Jeremy has also featured in other several films and TV shows.  In 2019, he joined the cast of First Wives Club playing the role of Wolfe. He portrayed the character of Alex in the 2019 short film Someone, Somewhere. He also appeared in the 2015 film Wasteland.

As a model, Jeremy is currently signed with Elite Model Management. He is set to work in a wide range of projects from fashion, lifestyle to beauty brand endorsements. In an interview, Jeremy expressed how much he loved fashion, especially European fashion. In addition, he has recently released a song titled “Partly Cloudy”.