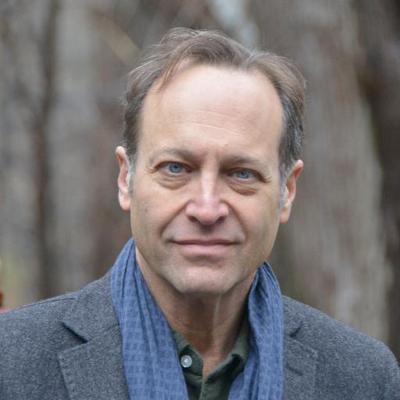 A native of Boston, Massachusetts, United States, Jeffrey Brown is an American journalist, who is a senior reporter for the PBS NewsHour.

His reports focus on literature and arts, and he has interviewed countless poets, writers, and musicians. He has also worked most of his professional career at PBS and has written a poetry collection called The News.

Brown is  65 years old as of 2021. He was born on 5 December 1956 in Boston, Massachusetts, United States. He celebrates his birthday on 5 December every year.

Brown stands at a height of 6 feet 2 inches (188.0 cm) tall. His weight has been publicly not mentioned. We will update this section once the information is available.

Brown attended the University of California, Berkeley, from where he studied Classics and graduated with a bachelor’s degree. He then enlisted in a joint program at Berkeley Law and the Columbia Journalism School from where he first studied law for two years and then studied journalism for one year. He gained a master’s degree in journalism but did not complete his studies in law school.

Brown was born and brought up in Massachusetts y his loving parents. His parents are Mirriam and Morton Brown.  He grew up in Belmont, Massachusetts alongside his four siblings.

Brown is happily married to the love of his life Paula Crawford. His wife is a professor, author, and artist. The couple met while they were both studying at UC Berkeley. They are together blessed with two kids.

Brown has an estimated net worth of $469 Thousand dollars

Upon graduating from Columbia Journalism School, Brown became Friendly’s teaching helper and a producer for the Columbia University Seminars on Media & Society. His duty was to assist produce and write the seminars that were circulated on public television.

He became part of the PBS NewsHour in 1988. However, he was employed as an off-camera economics journalist. He was initially based in New York City, but eight years later he moved to Washington, D.C. He operated as a reporter and a producer, prior to being boosted to the position of senior producer for national affairs. In 1998, he became an on-camera correspondent covering both general events and arts.

In March 2002 he was named the NewsHour’s arts correspondent. Three years later, he was promoted to senior correspondent. He joined the anchor team when The NewsHour with Jim Lehrer was renamed PBS NewsHour in December 2009.

Brown has won a number of awards, including a Peabody Award, a News & Documentary Emmy Award,  and numerous CINE Golden Eagle Awards. The Emmy was rewarded in the category “Outstanding Background/Analysis of a Single Current Story – (Segments)” for a segment about an antitrust case against Microsoft in 1999 and the Peabody Award for a segment about the unemployment rate in 2003.