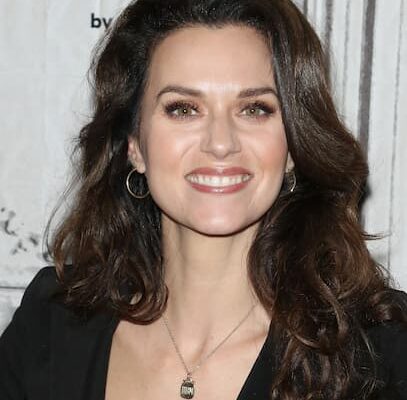 Hilarie Burton Morgan, a native of Virginia, is an American actress, entrepreneur, author, and producer. She is best recognized for hosting Total Request Live on MTV.

She played the role of Peyton Sawyer on the drama series One Tree Hill from 2003 to 2009. Morgan has also appeared in Our Very Own, Solstice, The List, White Collar, Grey’s Anatomy, and Forever.

The beautiful actress stands at an estimated height of 5 feet 7 inches (1.7 meters). She weighs about 60 kgs.

Burton was born and raised in Sterling, Virginia, United States. She was born to her father a veteran of the USA Army and her mother a real estate agent. Hilarie has three younger siblings; brothers.

Burton is married to actor Jeffrey Dean Morgan. The two tied the knot on October 5, 2019. They first met in 2009 after going on a blind date set by Jensen Ackles and his wife Danneel who were their previous co-stars.

Burton and Jeffrey have two kids together; Augustus born on March 14, 2010, and George Virginia born on February 16, 2018. The family resides in Rhinebeck, New York on a 100-acre working farm in the Hudson Valley. Their farm consists of various animals including cows, ducks, chickens, alpacas, donkeys, and an emu.

Her most notable job as a host was when she joined MTV’s Total Request Live. She was first hired as a guest commentator for one segment but was later offered a permanent position by the producers. She presented the 2000 MTV Video Music Awards and MTV’s Iced Out New Year’s Eve. In 2002, she appeared in The WB drama Dawson’s Creek as herself.

Burton alongside Sophia Bush and Bethany Joy Lenz from One Tree Hill started a podcast titled “Drama Queens”. In 2003 she joined the cast of WB’s drama series One Tree Hill as Peyton Sawyer. This was her most notable role and she earned three Teen Choice Award nominations for it. She was also ranked #77 in Maxim’s “Hot 100 List of 2007”, #2 on Femme Fatales’ “The 50 Sexiest Women of 2005”, and #12 on Much Music’s “20 Hottest Women of 2003”.

In 2005, she made her film debut in the drama film Our Very Own starring Allison Janney and Cheryl Hines. In 2007, she appeared in the Lifetime drama Normal Adolescent Behavior and the supernatural horror film Solstice. The same year, she launched her own production company called Southern Gothic Production (SoGoPro). Morgan has also made appearances in The Secret Life of Bees, The List, Bloodworth, and Castle.

In 2010, she was cast as Sara Ellis in the USA Network crime drama series White Collar. She became a recurring cast member in 2011 in the 3rd season. She also had a recurring role in the CBS drama Hostages, and CBS sci-fi drama Extant. Hilarie played the role of DEA agent love interest of main character Martin Riggs on Lethal Weapon.  She guest-starred as Lucille in the tenth season of The Walking Dead.

Hilarie is the author of a book titled: The Rural Diaries: Love, Livestock, and Big Life Lessons Down on Mischief Farm. The book was published in 2020.

Hilarie played the recurring role of Dr. Lauren Boswell in the ABC medical drama Grey’s Anatomy. She played this role for the final three episodes of the 2013 ninth season.

Morgan has an estimated net worth of $5 million. She has gained her net worth from her successful career as an actress, entrepreneur, author, and producer.