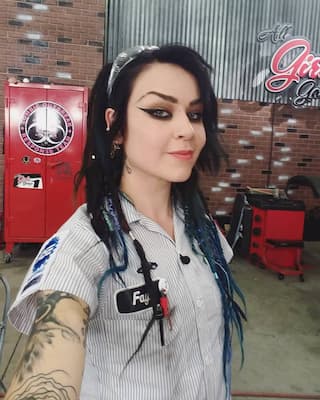 A native of San Antonio, Texas, Faye Hadley is an American Automotive technician from All Girls Garage. She is also a teacher and an entrepreneur.

Hadley attended Harvard University under a sponsorship deal to study psychology. She graduated with a degree in Psychology in the year 2010.

While at the university, Faye got an unpaid internship at a Volkswagen garage. While there, she learned the ropes on how to fix her blown car engine and brought it back to life.

After graduating from college, Faye began working as a licensed therapist, her mother noticed she wasn’t pleased with her job and advised Faye to follow her dreams.

She eventually quit her job and moved to Portland, Oregon where she got another unpaid internship at a garage while attending a local community college.

Hadley eventually secured a job at a Toyota dealership where after working for a while was able to save up and launched Pistons & Pixiedust, an auto repair shop found in San Antonio, Texas.

Hadley stands at a height of 5 feet 8 inches. Her weight measurements are not available.

Hadley is married to Brandon Hadley, a wooden artist. Faye and his husband, Brandon got married on September 25, 2016. This was after having dated for almost a whole year.

They began dating in late 2015 after being best friends for a long while.

There is no much information available about Hadley’s parents. It is, however, known that her father has a Ph. D. from MIT. He was such a big influence in her life serving both as a mentor and father figure.

Faye Hadley The All Girls Garage

“Come into the All Girls Garage and meet Bogi and Faye, a team of accomplished automotive technicians. Together they tackle everything from maintenance and performance upgrades to fabrication and engine swaps.

“In each episode, they break down complex projects into DIY-friendly steps, while showcasing each woman’s unique expertise in the world of automotive repair and service,” their website reads.

Hadley is one of the founders of #WomanAndMachine. It is an organization of tradeswomen that hosts daylong, female-centered, automotive workshops across the country.