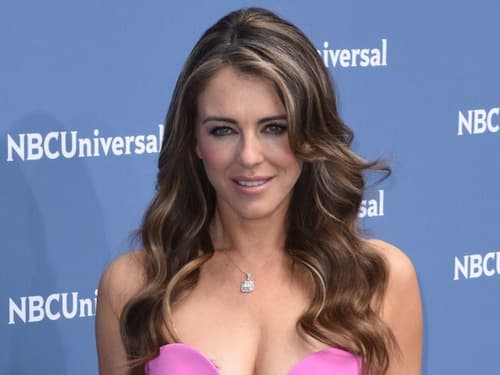 Elizabeth Jane Hurley is an English actress, comedian, businesswoman, and model best known for her roles as Vanessa Kensington in Austin Powers: International Man of Mystery and Devil in Bedazzled. She joined the cast of the E! original series The Royals in 2015. In 1992, she had her first role in a big-budget film; passenger 57. Hurley had her first modeling job with the cosmetics company, Estée Lauder, at the age of 29.

The actress stands at an estimated height of 5 feet 8 inches. She weighs about 57 Kgs (125 lbs). On to her measurements, she measures 36-23-34 inches. Her hair is light brown and has beautiful blue eyes.

Hurley was born and raised in Basingstoke, Hampshire. Her parents are Angela Mary and Roy Leonard Hurley. Her father Roy Leonard was a major in the Royal Army Educational Corps while her mum was a teacher working at Kempshott Junior School. Hurley has two siblings called Kathleen and Michael Hurley.

Hurley met Hugh Grant in 1987 on a Spanish production called Remando Al Viento. She later got into a relationship with him in the 1990s. She even accompanied him to the film premiere of Four Weddings and a Funeral in London. They dated for 13 years and split in May 2000. Hurley later had relations with American businessman Steve Bing.

She gave birth to her son Damian Charles Hurley on April 4, 2002. She later married Indian textile heir Arun Nay in 2007. They divorced on 2 April 2011. Three months after her divorce, Hurley got engaged to former Australian cricketer  Shane Warne. They reportedly separated on 16 December 2013.

Hurley made her film debut in 1987 after appearing in Aria. She later appeared in films like; Passenger 57, EDtv, Bedazzled, Serving Sara, and Dangerous Ground. In 1988, she appeared as a schoolgirl in the tv series Inspector Morse. She went on to play the title role in the five-part television drama, Christabel. In 2006, she hosted the inaugural series of the British reality show Project Catwalk airing on Sky 1.

Hurley joined the cast of the fifth season of Gossip Girl as Diana Payne in 2011. In September 2013, she joined The Royals airing on E!. The series was picked up in March and started airing in 2015. In 2019, Elizabeth played the role of Marvel Comics villain Morgan le Fay in the final season of the Hulu show Runaways.

Hurley became the spokesmodel of Estée Lauder in 1995. She proceeded to appear in ads and campaigns for Lauder. In 2005, she modeled for a number of brands including; Saloni, Liverpool Department Stores of Mexico, and Lancel. Hurley also participated in seasonal advertising campaigns for Jordache, Shiatzy Chen, Got Milk?, and Patrick Cox. She released her beachwear line “Elizabeth Hurley Beach” in April 2005 at Harrods in the UK.

Hurley has an estimated net worth of $50 million. She has gained her wealth from her successful career as an actress.