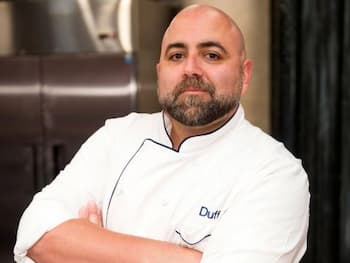 Jeffrey Adam “Duff” Goldman a native of Michigan, is an American television personality, pastry chef, and cookbook author. He is best recognized for appearing on tv shows like the Food Network Challenge, Iron Chef America, Oprah, The Tonight Show with Jay Leno, Man v. Food, Buddy vs. Duff, and Duff Takes the Cake. He is the executive chef of his restaurant Charm City Cakes shop. The shop was featured in the reality tv Ace of Cakes.

The television personality was born on December 17, 1974, in Detroit, Michigan, United States. Goldman is 46 years old.

Goldman stands at an estimated height of 5 feet 4 inches (1.63 meters). He weighs about 78 Kgs (172 lbs). The chef’s body measurement details are currently under review and will be updated as soon as they are available.

Goldman was born in Detroit, Michigan, and raised in Missouri. He was born to his parents Morrie Goldman and Jackie Winch. His parents divorced when he was only ten years old. After their divorce, he lived in both Northern Virginia and Cape Cod, Massachusetts. He has a younger brother named Willie Goldman. Duff is Jewish and is involved in Tzedakah.

Goldman is married to Johnna Colbry. He proposed to her on April 2, 2018. The two are parents to their 10-month-old baby girl Josephine Frances Goldman. She was born on January 31, 2021. She weighed 8 lbs and was 21 inches long. There is no further information about Duff’s wife in terms of her career and personal life.

Goldman and his wife announced that they were expecting a child on August 8, 2020. Their daughter Josephine Frances Goldman was born on January 31, 2021. She weighed 8 lbs and was 21 inches tall.

Goldman went to McLean High School in McLean, Virginia. He played ice hockey for the Highlanders team. He graduated from Sandwich High School in 1993. Duff joined the University of Maryland, Baltimore County. He later went to Corcoran College of Art and the Culinary Institute of America at Greystone in Napa Valley, California.

Duffs started working at the age of 14 when he started working at a bagel store at a mall. He later worked as a fry cook at McDonald’s. When he was a sophomore in college, he applied as a cook at a restaurant in Baltimore, Charleston.

He was employed by the head chef Cindy Wolf to make cornbread and biscuits only. After college, he worked in a stagiaire position at the French Laundry and as an executive pastry chef of the Vail Cascade Hotel in Colorado. He opened Charm City Cakes in 2002.

He was able to make cake sales at his house in Charles Village in Baltimore, Maryland with the help of two employees. Duff has made cakes for prominent leaders and celebrities including Barack Obama for his second inaugural ball, Tom Clancy, Sir Roger Moore, and for Katy Perry’s “Birthday” video.

Duff is the author of three books; Super Good Baking for Kids, Ace of Cakes: Inside the World of Charm City Cakes, and Duff Bakes: Think and Bake Like a Pro at Home.

Goldman has an estimated net worth of $5 million. He has gained all his wealth from his career as a pastry chef and from appearing on multiple tv shows.