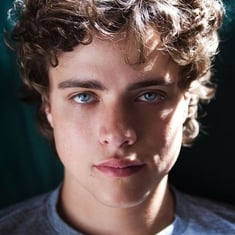 A native of Toronto, Canada, Douglas Smith is a famous Canadian actor known for his work on the HBO series Big Love as Ben Henrickson.

His other work includes Percy Jackson: Sea of Monsters, Vinyl, Miss Sloane, When We Rise, Terminator Genisys, The Alienist, and the second season of HBO’s Big Little Lies.

Smith has not disclosed the details of his education but owing to the nature of his work as an actor, he might have acquired proper education in his field.

Smith was born and brought up in Toronto, Ontario, Canada. He is the son of Terrea(mother), an American-born teacher, and Maurice Smith(father), a producer of low-budget films who is initially from the United Kingdom. Smith’s mother featured in some of the films that his father produced during the 1980s. He is the younger brother of actor Gregory Smith.

Smith has an estimated net worth of $4 million- $6 million USD.

Smith has been acting since he was cast as Malvolio in his fourth-grade creation of Shakespeare’s comedy Twelfth Night. Fans first saw him on the big screen as a young version of Brendan Fraser’s role in Blast from the Past.

As a teen, he went to Australia to play the lead character of an American boy living in Australia in a series called Out There. Early in his career, Douglas made many impressions on television procedurals, including CSI: Crime Scene Investigation, CSI: Miami, Close to Home, Family Law, The X-Files, Crossing Jordan, and Cold Case.

He is known for his usual character as Ben Henrickson on the HBO series Big Love, which aired for five seasons. He also played the character of Edward Porras in Brandon Cronenberg’s directorial debut, Antiviral. The film competed in the Un Certain Regard section at the 2012 Cannes Film Festival and took home the award for Best First Canadian Feature at the 2012 Toronto International Film Festival.

In late 2012, he filmed the musical/comedy/horror film Stage Fright. He played the characters of both Metal Killer and Buddy, performing two musical numbers in the film. Stage Fright premiered at the 2014 SXSW Film Festival and was issued by Magnolia Pictures.

2013 saw him star as Tyson, the cyclops half-brother of Percy Jackson in the film Percy Jackson: Sea of Monsters. He also started production for his lead character in the horror film Ouija for Universal/Platinum Dunes at the end of 2013.

A graduate of RADA’s Shakespeare Summer School, Douglas made his off-Broadway debut in 2014, starring in the New York premiere of Simon Stephens’ Punk Rock at the Lucille Lortel Theatre in the West Village. He played William Carlisle. The production and Smith’s performance received favorable reviews.

David Rooney of The Hollywood Reporter wrote, “In such an exemplary cast, it’s unfair to single out any one of the seven principal actors for special praise. But Smith, best known for HBO’s Big Love, is sad, scary and transfixing.” The production was nominated for both OBIE and Drama League Awards.

In 2015, Douglas was seen in a minor role in Terminator Genisys. He had a significant arc on HBO’s Vinyl in 2016. He then returned to the horror genre in The Bye Bye Man, where he starred in the role of Elliot.

In 2017, Douglas represented real-life friend and colleague Dustin Lance Black in When We Rise, an eight-part docudrama based on the memoirs of LGBT activist Cleve Jones directed by Gus Van Sant, Dustin Lance Black, Dee Rees, and Thomas Schlamme. Soon after, Douglas joined the cast of The Alienist, a 19th-century crime drama created by Cary Fukunaga based on the 1994 novel The Alienist.

His turn as one half of the darkly comedic Isaacson duo earned praise from critics like David Nevins of The Guardian who, in his review of the show, wrote: “Two of the best performances, though, are those of Matthew Shear and Douglas Smith as the brothers Isaacson, two bright and innovative Jewish forensic science specialists who stick out like sore thumbs in the very Irish-Catholic environs of Manhattan law enforcement.”