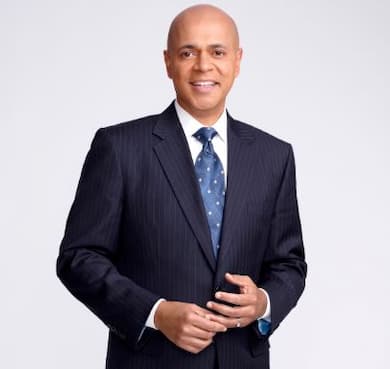 David Ushery is an American journalist and news anchor currently working at NBC’s WNBC News 4 New York. He presents the 4 p.m. and 11 p.m. newscasts. David became the news anchor of WNBC’s 4 and 11 p.m. newscasts in October 2020. Throughout his career as a news anchor at WNBC, he has been able to cover major breaking news stories including the terror attacks in Manchester, England, Orlando Florida, and Paris France.

The news anchor stands at an average height of 5 feet 8 inches and is of moderate weight. There are, however, no further details about his body measurements.

David was born and raised in Bloomfield, Connecticut, United States. His parents are Solomon Ushery and Winifred Ushery. He is an only child. Ushery has not given further details about his loving parents.

Ushery has been married to his wife Isabel Rivera for 20 years since 2001. Their marriage has been blessed with one son named Austin Ushery. Due to his discrete nature, not much is known about Ushery’s wife Isabel. However, further information will be updated.

Ushery went to the University of Connecticut. He graduated with a double major in political science and journalism. In college, David was a staff writer for the Hartford Courant newspaper. In addition, he served as a reporter for the Los Angeles Times.

Ushery, at the age of 11, was picked to host the nationally syndicated tv show local edition of “Kidsworld”. He was able to interview various anchors including the late Walter Cronkite. He was a former CBS News anchor.  After graduating from college, he was hired by WFSB-TV for its training program. He was promoted to full-time general assignment reporter. He became the lead reporter for WFSB’s 11 pm broadcast.

David joined WABC-TV in 1993 as a general assignment reporter. While there he took part in the coverage of the police investigations into the shooting death of Amadou Diallo and the torture of Abner Louima, and the deaths of Jacqueline Kennedy Onassis and John F. Kennedy, Jr. among other major stories. In 1996, David became the anchor of a new weekend show, “Eyewitness News This Morning.” He presented the weekday morning newscasts and the news at noon and primarily filled in for the late Bill Beutel.

In 2003, David joined WNBC-TV. He anchored the morning program “Weekend Today in New York.” He later became the anchor of WNBC’s weekend 6 pm and 11 pm newscasts. After three years in 2006, David became co-anchor of WNBC’s program “Live at 5” then later went back to present “News 4 New York.” While at WNBC, David has covered multiple major stories including delivering live updates following the funeral of former President George H.W. Bush in 2018 and the Pulse Nightclub shooting.

David hosted NBC Universal and “Going Green at Any Age.” He launched 2011 Emmy nominated  “The Debrief with David Ushery,” in 2009. In 2010, David launched a spin-off program “Moms and the City and a Dad named David” after he featured blogging New York City mothers on an episode of his show.

As one of the top-rated news anchors at WNBC, Ushery earns a decent average salary of $88, 103 annually.

Ushery has an estimated net worth of $1.4 million. He has earned his net worth from his long successful career as a journalist and news anchor.