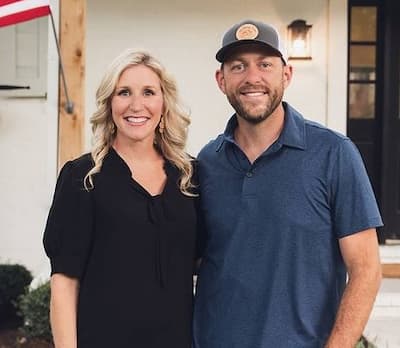 Dave Marrs a native of Kiowa, Colorado, is an American craftsman and television personality best known for co-hosting the tv show Fixer to Fabulous on HGTV. He stars in the show alongside his wife Jenny Marrs an interior designer. Together they restore historic homes in Bentonville, Arkansas. The show originally premiered in October 2019.

Marrs appears to be quite tall. His height measures 6 feet 1 inch and he weighs about 86 Kgs (189 lbs). However, further details about his body measurements. These details will be updated soon.

Marrs was born and raised in Kiowa, Colorado. Dave was born into a military family since his father was in the army. There is, however, no information about his parents’ names. Marrs has a brother nmaed Matt Marrs. He is married to Karey Ross Marrs. Marrs has a sister too although her information is currently not disclosed.

Marrs is happily married to his wife Jenny Marrs. The two have been married for 15 years now since April 2nd, 2005. Jenny is his co-star on the tv show Fixer to Fabulous on HGTV. They met back in 2002 while Dave was working at Newell Brands. Although Jenny was working in a different department, they got together and immediately clicked.

The couple moved to Arkansas in 2004 and have been this place home since. The couple has five children together. Their twins Nathan and Ben are 9 years old, Sylvie is 7 years old, Charlotte is 5 years old and Luke is one year old. Their daughter Sylvie is adopted from the Democratic Republic of Congo in Central Africa. They adopted her in August 2013. They however had to wait about 600 days until July 8, 2014, to be able to bring her home.

Dave is the co-host of the tv show Fixer to Fabulous airing on HGTV. The show was initially called Almost Home. Its pilot first aired in November 2017. Its name was changed in October 2019 when the show was ready to air again. Dave together with his wife an interior designer restore historic homes in Bentonville, Arkansas.

In addition, Dave is the owner of the Fayetteville, Arkansas-based company Marrs Construction. Dave started the company after leaving Newell Brands’ Rubbermaid. His wife Jenny also left her marketing and sales career and decided to join Dave full-time in the company. The two also have a berry farm named The Berry Farm. They started the farm to help children in Zimbabwe get educational skills.

Dave has a tattoo on the inside of his right arm written in Hebrew. Most of their fans have always wondered what is the meaning of the tattoo. Dave, however, does not speak much about his tattoo but his wife did. In a 2017 tweet, Jenny explained that the tattoo meant “My Believer” from Psalms 18:2. She said that the tattoo meant a lot to dave.

Dave is reported to have an impressive net worth of $2 million. The television personality has not only gained his net worth from being a host, but also from his company Marrs Construction.