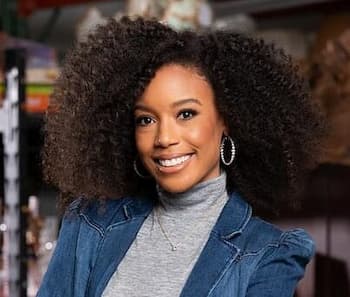 Courtney Tezeno a native of Houston, Texas, is an American television personality, producer, and content creator. She has been named one of “Buzzfeed’s” Top 5 Black Female Entertainment Journalists Under 30. Courtney hosts HGTV’s tv show “Cash in the Attic”. The show premiered in September 2021.

Tezeno stands at an average height and is of moderate weight. There are no details about her body measurements. These details will, however, be updated as soon as they are available.

Courtney was born and raised in Houston, Texas, United States.  She has not yet disclosed any information about her parents or siblings if she has any. However, this information will be updated as soon as it is available.

Tezeno has been married to her husband Jarrelle Lee since May 2021. The married couple got engaged in December 2018 after dating for five years. They first started dating in 2013. Jarrelle Lee is a high-end beauty and fashion photographer. He is the owner of Jarrelle Studios.

Tezeno is the host of HGTV’s tv show “Cash in the Attic”. The show premiered in September 2021.  The six-episode series follows Courtney as she teams with experts to look for various pop culture items in different homes. These items include; classic toys, vintage comics, and original video games. After finding the items and selling them, the homeowners use the money to fund or pay for different things like a vacation or a house downpayment. Tezeno teams up with experts including; Elyse Luray, Jean David Michel, and Marvin Jules.

Prior to joining HGTV, Courtney served as a co-host for Close Up by E! News in Los Angles, California. She started her career as an intern for PBS in Houston. She worked as a reporter for KBIA Public Radio and later worked as a general assignment reporter and fill-in anchor at KOMU-TV. In September 2014, Courtney became a production assistant at E! Networks in Los Angeles.

From there, she hosted Black Hollywood Live from 2015 to 2016. She has also worked as a host and producer at Afterbuzz TV. Tezeno was a red carpet reporter, producer, and on-air personality at Obsec Studios. She has also hosted Entertainment Tonight and multiple shows for Trinity Broadcasting Network. In addition, Courtney co-hosts a podcast: Boss Lady Energy alongside Kristen Maughan and Nikki Hendry.

As of 2021, Tezeno’s net worth is still under review and will be updated as soon as it is available.