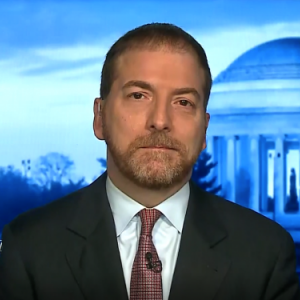 A native of  Miami, Florida, United States, Chuck Todd is a famous and popular American television journalist who is the 12th and current moderator of NBC’s Meet the Press. Yet, he also hosts Meet the Press Now, its daily edition on NBC News Now, and is the Political Director for NBC News.

Todd graduated from Miami Killian Senior High School in Kendall, a Miami-Dade County unincorporated suburb. Todd studied at George Washington University between 1990 and 1994. He declared a major in political science and a minor in music, but he never acquired a diploma.

Todd was born and raised in  Miami, Florida, United States by his parents. He is the son of Lois Cheri (née Bernstein) and Stephen Randolph Todd (father). He is Jewish on his mother’s side and was raised Jewish. His siblings are not known. We will update this section as soon as the information is available.

Todd is cheerfully married to his loving and caring wife Kristian Denny Todd. The couple resides in Arlington, Virginia with their two children inclusive of a son known as Harrison Todd and a daughter called Margaret Todd.

Todd has an estimated net worth of $48 Million

While still in college, Todd operated on Senator Tom Harkin’s presidential campaign in 1992. Thereafter, he worked part-time at National Journal’s The Hotline. Before entering political analysis, he gained firsthand experience in politics by working on campaigns in Florida and other national campaigns in Washington, D.C.

From 1992 to March 12, 2007, Chuck was the editor-in-chief of the National Journal’s The Hotline. As part of his job, he co-hosted the webcast series Hotline TV with John Mercurio. He was also a regular guest on political talk shows such as Hardball with Chris Matthews and In-Depth with Chris Matthews.

Todd joined NBC in March 2007 after leaving The Hotline. For the time being, he took over as NBC News’ political director. In this role, Chuck provided on-air political analysis on political talk shows. Among the shows cited were Morning Joe, Hardball with Chris Matthews, Meet the Press, NBC Nightly News with Lester Holt, and The Rachel Maddow Show.

After Tim Russert’s death in June 2008, Todd was an outstanding candidate to succeed him as host of NBC’s Meet the Press. On the other side, David Gregory was named to fill in for him. As a result, the network had to be reorganized.

Todd retained his position as NBC News Political Director, and he was promoted to Contributing Editor of Meet the Press. On January 11, 2010, Chuck began co-hosting The Daily Rundown on MSNBC with Savannah Guthrie. This show aired every weekday morning from 9:00 to 10:00 a.m. ET.

According to reports in August 2014, Todd was set to take over as host of Meet the Press on September 7, 2014. He kept his job as NBC News political director while leaving the others to take on the new role.

On July 23, 2015, MSNBC announced Chuck’s return as the anchor of MTP Daily, a daily political show. This show aired on weekdays at exactly 17:00 ET.