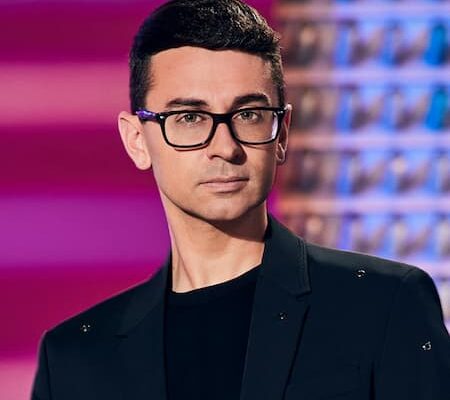 Christian Vincent Siriano, a native of Annapolis, Maryland is an American fashion designer and a member of the Council of Fashion Designers of America (CFDA). He was the host and mentor of the 19th season of Project Runway.

Siriano rose to prominence after appearing on the 4th season of Project Runway which he won. His collection named after him “Christian Siriano” was launched in 2008.

Siriano stands at an estimated height of 5 feet 3 inches (1.63 meters). He weighs about 62 Kgs (136 lbs). There are no further details about his body measurements.

Siriano was born and raised in Annapolis, Maryland. His parents are Joye Siriano and Peter Siriano. He disclosed that his parents have always arts and encouraged him to pursue creative arts. He has an older sister Shannon, a community builder and the founder of Rebelle Con. Siriano is of Italian and German descent.

Siriano is openly gay. He was previously married to Brad Walsh a singer and songwriter. They got engaged on July 28, 2013, and got married on July 9, 2016, in Danbury, Connecticut. They separated in April 2018. Currently, Siriano is in a relationship with Kyle Smith.

Christiano launched his collection “Christiano Siriano” on September 13, 2008, at the New York Fashion Week. After launching his line, it retailed at Neiman Marcus and Saks Fifth Avenue. He appeared on Crain’s Top 40 Entrepreneurs Under 40 list. This was after his collection was reported to bring in a revenue of $1.2 million as of 2010. The collection brought in a revenue of $5 million in 2012. He opened his flagship store in September 2012 on Elizabeth Street in Manhattan. In 2014, he launched his fragrance.

Christian competed on the 4th season of Project Runway of which he won. He gained wide recognition after winning the show. He won a spot to showcase his twelve-piece final collection at New York Fashion Week. After being announced the winner of the show, he got a 2008 Saturn Astra, US$100,000 to start his own label, and a fashion spread in Elle magazine. Siriano has mentored and hosted Project Runway seasons 17, 18, and 19.

In 2013, he was inducted into the Council of Fashion Designers of America (CFDA). Siriano has collaborated with several brands include Puma in April 2008, Payless ShoeSource in February 2009, LG in 2009 creating a fashion-themed phone, the LG Lotus (LX600), Victoria’s Secret for Christian Siriano for VS Makeup, and Starbucks. In addition, he collaborated with Spiegel for a limited collection called “Christian Siriano for Spiegel” and HSN for an affordable limited collection of dresses, separates, and accessories named S”Striking by Christian Siriano”.

Siriano created the ensemble costumes for Disney’s fairies the Disney animated film The Pirate Fairy. Siriano appeared on season 2 episode 15 of Ugly Betty. He designed some of the actor’s costumes. He also featured on the music video of R&B artist Estelle’s single “No Substitute Love.”

Siriano has an estimated net worth of $10 million. He has earned his net worth from his career as a fashion designer.