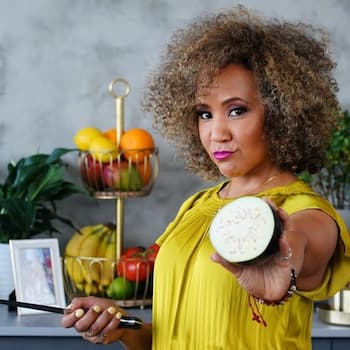 Born in Havana Cuba and based in Washington DC, Bren Herrera is an American celebrity chef as well as a food, lifestyle, and travel writer.

On her Linkedin account, Herrera describes herself as an author and speaker with an infectious ability to curate and tell stories that matter.

She has dedicated the past 15 years to celebrating her Afro-Cuban roots through food and travel. Bren’s dishes are globally inspired. They are a combination of Cuba’s vibrant plate, seeded in African, European, and Spanish culture and cuisine.

Some of her work has been featured in print, online, and radio. Most notable is the Smithsonian’s National Museum of African American History & Culture. Here Bren’s recipes have been featured on the menu of the ‘Sweet Home Café’. They also sell her cookbook ‘Modern Pressure Cooking’ (2016).

As of September 2021, Herrera is the guest host of New Soul Kitchen, an unscripted cooking series with Chef Jernard Wells. In the show, Wells welcomes culinary guests each week. The culinary guests introduce viewers to their unique cuisine.

Herrera has made her recipes available to anyone who would like to take on the adventure of taking on new cuisines. Bren’s recipes are Cuban-themed and Latin fusion and are mostly taught by her mother.

Herrera is yet to share her date and year of birth. Her age, therefore, remains unknown.

Information about Herrera’s family will be updated as soon as it is available. As of the time this article was published, there was no available information on her parents and/or siblings.

Herrera is not yet married. Other than that, she loves keeping her dating life away from the public and as a result, there is no information available on her romantic life.

Herrera is also an entreprenuer. She is the founder of The Beehive Collective, a boutique consulting company. Bren offers bilingual multi-media consultancy to start-ups, entrepreneurs, and small businesses. It was founded in 2018.

She was honored by the Washington D.C. Mayor’s Office as a community leader having an impact through her food and culture-based activism.