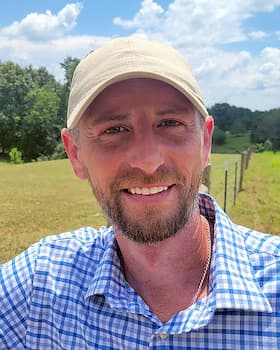 A native of Camden, Tennessee, Brandon “Frenchie” French is an American farmer who became known as a contestant on Big Brother 23.

French is 34 years old as of 2021. His exact date of birth is not yet known. He resides in Clarksville, Tennessee.

French stands at a height of 6 feet 1 inch.

At the moment, there is no information available about his parents or siblings. He has three brothers and one sister. They all seem to be leaving a life away from the limelight. We will provide more information on his family as soon as it is available.

Frenchie has managed to keep information about his love life very private. It is not known whether he is actually married is dating or is single. He however has three children; two daughters and a son. Frenchie also lost a son in 2016.

Frenchie revealed that his son died after he was asked what he would bring to the Big Brother House and said: ” A picture of my son who passed away because it motivates me like no other.”

“It’s hard to believe my son would have been starting kindergarten this year. HAPPY BIRTHDAY baby boy we think about you every day. Your daddy misses you SO much. I’ll be sending a balloon with a kiss to you up in heaven. My heart always cuts wide open today.”

Frenchie is a contestant on Big Brother 23. He is a farmer who describes himself as Supercalifragilisticexpialidocious, compassionate, and exuberant. Some of his favorite activities are “Yes” days with the kids, fishing, playing with the baby animals, and grilling out.

His favorite Houseguest duos are Britney Haynes and Rachel’s hair extensions! As of what Frenchie is most excited about living inside the Big Brother house, he said it was living out my dream of being here.

“I learned life is way too short with the passing of my son so just being able to live out this dream. I’m here to WIN, not to get famous!” he said.

When asked about his winning strategy, Frenchie said that it was building relationships with everyone, not just his alliance. As a farmer, he says no two days are the same and that you never know what to expect.