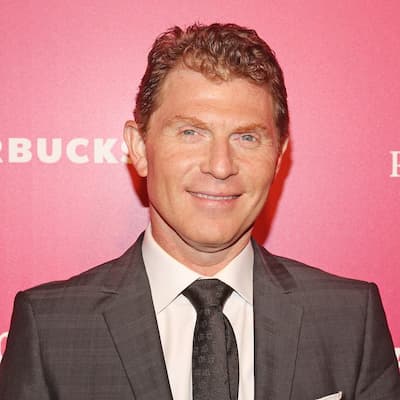 Born Robert William Flay, Booby is an American celebrity chef, restaurateur, and reality television personality. He has hosted several tv shows on Food Network and featured on the Great Chefs tv series. Booby owns a number of restaurants including; Amalfi in Las Vegas; Gato in New York and Bobby Flay Steak in Atlantic City. He is also the owner of Bobby’s Burger Palace in 19 locations across 11 states.

Flay stands at an average height of 5 feet 11 inches and is of average body size. There are no further details about his body measurements. These details will however be updated as soon as they are available.

Flay was born in New York City and raised in the Upper East Side neighborhood of Manhattan. His parents are Bill and Dorothy Barbara (McGuirk) Flay. There is no much information about his parents. Bobby was raised catholic and he is a fourth-generation Irish American.

Flay has been married three times. His first marriage was to chef Debra Ponzek. They got married on May 11, 1991, and divorced in 1993. His second marriage was to Kate Connelly in 1995. They separated in 1998. The two have a daughter named Sophie Flay. Bobby then married actress Stephanie March, on February 20, 2005. The two got divorced on July 17, 2015. In 2016, he got into a relationship with Helene Yorke. They stopped dating in early 2019.

Flay has one daughter with his second ex-wife Kate Connelly; Sophie Flay.  She was born on April 16, 1996.  The 25-year-old is a community journalist for ABC7.

Bobby started his career at a pizza parlor and Baskin-Robbins after dropping out of high school. He later started making salads at Joe Allen Restaurant in Manhattan. His father was a partner at the restaurant. Joe would later agree to pay Bobby’s tuition fees at the French Culinary Institute. After graduating, he started working as a Sous-chef.

Flay opened Bolo Bar & Restaurant in November 1993 alongside partner Laurence Kretchmer. In 2004, he opened the second Mesa Grill at Caesars Palace in Las Vegas. He opened Bar Americain in 2005 and Bobby Flay Steak in the Borgata Hotel Casino & Spa in Atlantic City, New Jersey shortly after. His third Mesa Grill was opened on March 28, 2007.

In 2003, he established the Bobby Flay Scholarship which is awarded annually to a student who is in the Long Island City Culinary Arts Program. In 2008, he opened Bobby’s Burger Palace in Lake Grove, Long Island. So far, he has BBP shops in 19 locations across 11 states including; Smith Haven Mall, Monmouth Mall in Eatontown, New Jersey, and The Outlets at Bergen Town Center in Paramus, New Jersey.

Flay has appeared in several episodes of Great Chefs television including; Great Chefs Cook American, Mexican Madness DVD, and Great Chefs – Great Cities. He was also an Iron chef on the show Iron Chef America. He has hosted The Main Ingredient with Bobby Flay on Lifetime Television in 1996 and America’s Next Great Restaurant on NBC.

In addition, he has appeared in the Disney Channel movie Eddie’s Million Dollar Cook-Off as a cook-off host. He also appeared in an episode of Law & Order: Special Victims Unit. In 2008, he took part in the Taco Bell All-Star Legends and Celebrity Softball Game played at Yankee Stadium. Flay featured in the animated film Scooby-Doo! and the Gourmet Ghost as Fred Jones.

He has been awarded multiple awards and honors including;

The show features selected chefs who go against Flay to see if they can create better dishes than Bobby’s. The show airs on Food Network. Episode 5 of season 17 of the show was selected as the 2018 lead-out show for season 14 of Food Network Star. This episode featured Debbie Gibson and Katie Lee.

Bobby owns and operates multiple restaurants including;  Amalfi in Las Vegas; Gato in New York, Bobby Flay Steak in Atlantic City, Mesa Grill in Las Vegas, and Bar Americain in New York. He is also the owner of Bobby’s Burger Palace in 19 locations across 11 states.

Flay has an estimated net worth of $30 million.  He has acquired all his wealth from his successful career as a chef, restaurateur, and television personality.