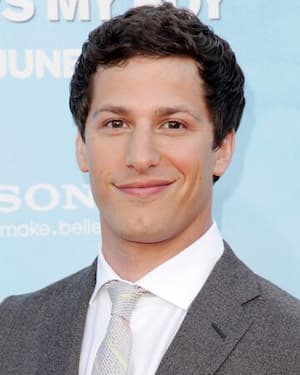 David A. J. Samberg a native of California, is an American actor, comedian, writer, musician, and producer. Andy is part of a comedy music group called The Lonely Island. He joined the cast of Saturday Night Live in 2005 and left in 2012. He is best known for his roles in Sitcom Brooklyn Nine-Nine, Hot Rod, I Love You, Man, That’s My Boy, Celeste and Jesse Forever, Popstar: Never Stop Never Stopping, and Palm Springs.

Andy stands at an estimated height of 5 feet 8 inches. His weight is currently not documented and neither is his body measurements. Information about his weight and body measurements will be updated as soon as it is available.

Samberg was born and raised in Berkeley, California. His mother’s name is Marjorie Samberg. She is a retired school teacher. She taught at John Muir Elementary School. His father’s name is Joe Samberg. He was a photographer. Andy grew up together with his two sisters Johanna and Darrow.

He was born into a Jewish family. Samberg disclosed in an episode of Finding Your Roots, hosted by Henry Louis Gates Jr. that his mother was adopted by Jewish parents. He added that she is the biological daughter of Salvatore Maida a Sicilian (Italian) Catholic father.

Her mother Ellen Philipsborn was a German-Jewish refugee. His mother’s adoptive father was an industrial psychologist and philanthropist Alfred J. Marrow. US Senator Tammy Baldwin is his third cousin.

Andy is happily married to his wife Joanna Newsom, a musician. The two met back in 2009 at one of Joanna’s concerts. Samberg has described herself as her superfan. They dated for five years until February 2013 when Samberg proposed to her.

On September 21, 2013, they tied the knot in Big Sur, California. Seth Meyers Samberg’s SNL co-star was his groomsman. The two have a daughter born on August 8, 2017. They live in Beachwood Canyon, Los Angeles, California in the Moorcrest estate. They purchased the estate in March 2014.

The comedian and his wife Joanna Newsom have one daughter. She is three years old born on August 8, 2017.  During E!’s Golden Globe pre-show, Samberg detailed how he and his wife were holding up as parents to their daughter.

Andy became an online personality after making his own comedy videos together with his two friends Akiva Schaffer and Jorma Taccone. They used the video platform YouTube after it was created in 2005. Samberg made sketch videos on his sketch comedy website TheLonelyIsland.com which led him to be featured on Saturday Night Live. Andy, Schaffer, and Taccone started writing for SNL in 2005.

He starred in the 2005 Digital Short show “Lazy Sunday”. It was a hip-hop song about a quest to see the film The Chronicles of Narnia: The Lion, the Witch, and the Wardrobe. His song “Dick in a Box”, with Justin Timberlake was awarded a Creative Arts Emmy for Outstanding Original Music and Lyrics. His other song “I’m on a Boat”, with T-Pain was nominated for a Grammy Award.

He has also participated in live segments including the Blizzard Man sketch. They released their debut album titled Incredibad in 2009. Andy gave the Class Day speech at Harvard University in 2012. The same year, he starred in That’s My Boy and Hotel Transylvania. Andy has won a Golden Globe Award for Best Actor – Television Series Musical or Comedy for his character as Jake Peralta in Brooklyn nine-nine.

Samberg has an estimated net worth of $20, million.  He was the highest-paid actor on Brooklyn nine-nine making $125,000 per episode. He was also part of the production team.