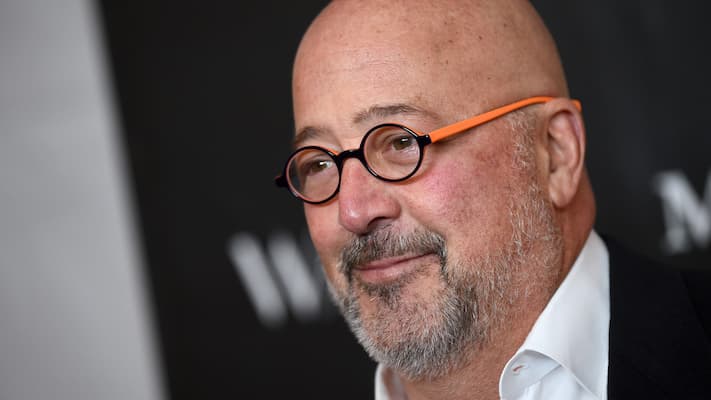 The television personality stands at an average height of 5 feet 9 inches and weighs about 76 Kgs. Further details about his body measurements are currently under review and will be updated as soon as they are available.

Andrew was born and raised in New York. He comes from a Jewish family. His parents are Caren Zimmern and Robert Zimmern. His parents divorced when he was only 6 years old. At the age of 13, his mother fell into a coma after a surgery she had. She however spent most of her days in and out of mental hospitals. She died in 2011.

Zimmern is currently divorced. He was previously married to his ex-wife, Rishia Haas. They were married for about 16 years from 2002 to 2018 when they finalized their divorce. They met back in 1999 at a school where Andrew was teaching cooking classes at that time. The two have one child together; 16 year old Noah Zimmern.

Zimmern began his culinary training at the age of 14. He worked as an executive chef and general manager at various restaurants in New York. He was a teacher at The New School for Social Research. Andrew would however fall into drug addiction. In 1992, he moved to Minnesota. He joined Hazelden Treatment Center for drug and alcohol addiction treatment. Andrew was an executive chef at Café Un Deux Trois in Minneapolis’s Foshay Tower.

Andrew is currently a contributing editor and columnist at Mpls. St. Paul Magazine. In addition, he is a senior editor at Delta Sky Magazine. He has previously worked for national and international publications. The chef is also an international spokesman for Travel Leaders and Elite Destination Homes. As a radio presenter, he hosted Chowhounds, The Andrew Zimmern Show, and Food Court With Andrew Zimmern which gained popularity.

Zimmern also worked as a food features reporter for Fox TV station KMSP-TV a. He has contributed to both HGTV’s Rebecca’s Garden and Tip-ical Mary Ellen. Andrew has been a guest chef at various charity events including Food and Wine Magazine’s Aspen Festival, and the Twin Cities Food and Wine Experience. He has made appearances on Food Network’s Best Of…, CNN’s Money and Health, and NBC’s Today Show.

In addition, Zimmern is the author of the book titled The Bizarre Truth: How I Walked out the Door Mouth First … and Came Back Shaking My Head. The book was published in 2009. It features a collection of his food and travel stories. His other books are; Andrew Zimmern’s Field Guide to Exceptionally Weird, Wild, and Wonderful Foods and Alliance of World Explorers, Volume 1: AZ, and the Lost City of Ophir. His third book was awarded the 2019 Gold IPPY in Juvenile Fiction.

Zimmerman has an estimated net worth of $14 million. he has garnered all his wealth from his long successful career as a chef, restaurateur, television personality, and radio personality.