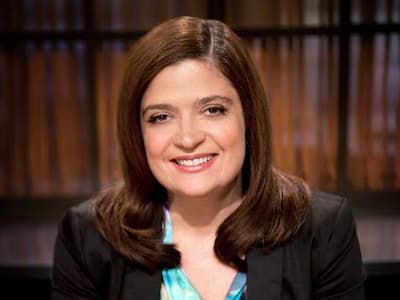 Alexandra Maria Guarnaschelli is an American Chef, author, and television personality. She is currently the executive chef at Butter restaurant in New York City. She was previously working as an executive chef at The Darby restaurant before it closed down. She has appeared on multiple tv shows including; The Kitchen, Chopped, Iron Chef America, and All-Star Family Cook-off.

The chef stands at an estimated height of 5 feet 4 inches. There is no further information about her body measurements. These details will however be updated as soon as they are available.

Maria was born in St. Louis, Missouri, and raised in New York City. Her parents are Maria Guarnaschelli and John Guarnaschell. While there is no information about her father, her mother is a cookbook editor. She is the only child of her parents.

Alex has been married before. Her first marriage was to Brandon Clark. The two tied the knot on April 29, 2007. The two met in 2006 at New York’s Institute of Culinary Education where Alex was teaching a fish class at the time. Their marriage was blessed with a daughter; Ava Clark.

Alex is currently engaged to Michael Castellon a Chef who won in the cooking competition show Chopped. She announced the news of her engagement in June 2020. Michael proposed to her on her birthday on June 20th.

Alex has one daughter from her previous marriage to Brandon Clark. Her daughter Ava Clark was born in July 2007. She is 14 years old as of 2021.

Alex has also hosted a number of tv shows including; The Cooking Loft with Alex Guarnaschelli, and Alex’s Day Off. She has appeared as a judge on Food Network Challenge, Chopped, Cooks Vs. Cons, Young and Hungry, and Guy’s Grocery Games. Alex was a contestant on The Next Iron Chef: Redemption. she made her Iron Chef debut on December 30, 2012.

Guarnaschelli was featured in episode five of Iron Chef Gauntlet as a judge. She also appeared on Beat Bobby Flay as a competitor. She has made more appearances on Billions and Worst Cooks in America. In addition, Alex has authored three books; Cook With Me, The Home Cook, and Old School Comfort Food: The Way I Learned to Cook.

Guarnaschelli has an estimated net worth of $2 million. Her main source of income comes from her successful career as a chef, author, and television personality.