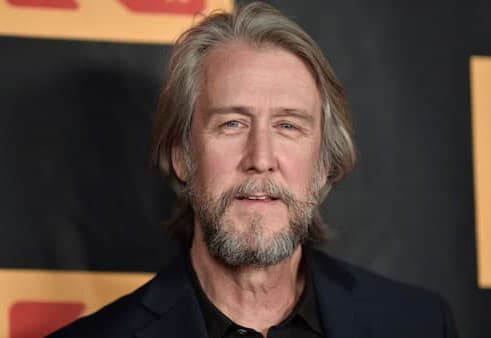 Alan Douglas Ruck a native of Ohio, is an American actor. He is widely recognized for his role as Cameron Frye, in the 1986 John Hughes’s film Ferris Bueller’s Day Off. He plays the role of Connor Roy in the HBO series Succession. Alan is also known for his roles in Bad Boys, Three Fugitives, Young Guns II, Speed, Twister, and The Exorcist.

Alan stands at an approximated height of 6 feet (1.83 meters). The actor weighs about 70 Kgs. Further information about his body measurements is not available. This information will, however, be updated as soon as it is available.

Ruck married actress Mireille Enos on January 4, 2008. They met in 2005 in the set of the Broadway revival of Absurd Person Singular. They have a daughter born named Vesper born in 2010 and a son named Larkin born in July 2014. This is, however, not Ruck’s first marriage. He was previously married to Claudia Stefany. They tied the knot in 1984 and divorced in 2005. They share a daughter Emma and a son named Sam.

Ruck has two sons. His first son Sam is from his first marriage to Claudia Stefany. His second son Larkin was born in July 2014. There is no further information about Ruck’s two sons.

Ruck made his film debut in 1983 after appearing in the film Bad Boys. He then appeared on Class followed by Ferris Bueller’s Day Off in 1986. Alan went on to appear in Three Fugitives, Young Guns II, Star Trek Generations, Speed, and Twister. In 1990, Ruck was cast as Charlie Davis in the ABC series Going Places. However, the show was canceled after one season in 1991.

In 2008, Alan appeared as Ricky Gervis a ghost of a family man in the film Ghost Town. He also played the role of a bank robber in a season three episode of the USA Network series Psych. Alan guest-starred as a scientist turned criminal on the television show Fringe. In 2016, Alan joined the cast of The Exorcist as Henry Rance. In 2018, he was cast as Connor Roy in the HBO series Succession.

Ruck plays the role of Connor Roy in the HBO series Succession. His character is the first and only child from Logan Roy’s first marriage. The series follows the Roy family the owners of Waystar RoyCo, a media, and entertainment company. The show premiered on June 3, 2018.