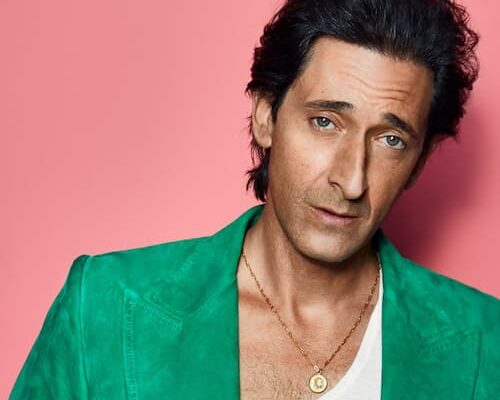 Adrien Nicholas Brody is an American actor and producer. He gained wide recognition after playing the role of Władysław Szpilman in the 2002 film The Pianist. He won an Academy Award for Best Actor for his role in the film. Adrien became the second male American actor to win the César Award for Best Actor. Brody has starred in multiple films including; The Thin Red Line (1998), The Village (2004), King Kong (2005), Predators (2010), and Midnight in Paris (2011).

Brody stands at an estimated height of 6 feet 1 inch (1.85 meters). He weighs about 83 Kgs. The 43-year-old has black hair and dark brown eyes. Further details about his body measurements will be updated as soon.

Brody was born and raised in Woodhaven, Queens, New York  City. He was born to his parents Sylvia Plachy and Elliot Brody. His mother was a photographer born in Budapest, Hungary. Her father was a Catholic Hungarian aristocrat father and her mother was a Czech-Jewish. Brody’s father is a retired history professor and painter. He is of Polish-Jewish descent.

Adrien is yet to get married. However, he is reportedly in a relationship with English fashion designer and actress Georgina Chapman. He was previously in a relationship with Spanish actress and model Elsa Pataky. The two started dating in 2006. In 2008, they were even featured in a 35-page spread for HELLO! magazine. They, unfortunately, broke in 2009. Brody dated music industry personal assistant Michelle Dupont from 2003 to 2006.

Brody started his acting classes while still a kid. At the age of 13, he appeared in a PBS television film and Off-Broadway play. In 1996, he appeared in Bullet alongside Tupac Shakur and Mickey Rourke. He received an Independent Spirit Award nomination for his role in the 1998 film Restaurant. He gained wide recognition after playing the role of Władysław Szpilman in the 2002 film The Pianist. Brody won an Academy Award for Best Actor for his role in the film.

In May 2003, Brody appeared on Saturday Night Live. He went on to appear in films Dummy in 2003, The Village in 2004, The Jacket, King Kong, and The Darjeeling Limited. In 2011, he appeared in a Stella Artois beer ad called “Crying Jean”. The same year, he made an appearance in Woody Allen’s 2011 Academy Award-winning comedy, Midnight in Paris. Brody was a runway model for Prada Men Fall/Winter 2012 show on January 16, 2012.

Brody has collaborated with Wes Anderson in several films including; The Darjeeling Limited (2007), Fantastic Mr. Fox (2009), The Grand Budapest Hotel (2014), and The French Dispatch (2021). His lead role in the miniseries Houdini earned him an Emmy Award nomination for Outstanding Lead Actor.

Adrien joined the cast of the fourth of BBC crime drama Peaky Blinders in 2017. He played the role of Luca Changretta for only 6 episodes. The tv series that stars Cillian Murphy as Tommy Shelby follows the Shelby crime family after the First World War.

Brody was cast as Josh Aaronson in the third season of the HBO series Succession. This season of the show premiered on October 17, 2021. The show stars Hiam Abbass as Marcia Roy, Nicholas Braun as Greg Hirsch, Brian Cox as Logan Roy, Kiera Culkin as Roman Roy, and Peter Friedman as Frank Vermont.

Brody has an estimated net worth of $18 million. He has made his wealth from his successful career as an actor.