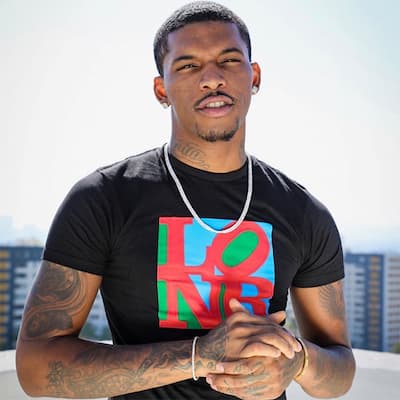 A native of Chicago, Illinois, 600Breezy, whose real name is Antonio Valentino King is an American rapper and songwriter known for some of his hits like 24 Bars,” and “Lou Rawls.”

He draws on real-life experiences for his lyrics. At the age of 21 years, Antonio was arrested after being caught up in a drug sting. % years later, he returned t prison for a parole violation.

Antonio stands at a height of 6 feet 5 inches.

Antonio was in a relationship with Raven Jackson. She was a fitness trainer, host, model, and motivational speaker who died on September 6, 2022. He and Raven had been together for two years.

He paid tribute to her on a couple of Instagram posts. In one he shared that he had the best two years of his life with Raven.

In another post he wrote; “My baby was hurting and I did everything I could to show her nothing but love and keep her going. I put everything into her and her business. I believed in her I worshipped the ground she walked on.

“She’s gone forever. I hate myself. Please when your loved ones are showing signs of any mental damage or health please take them seriously. This is real . This is what she left me with . And I suppose to be able to continue to live ?????

“@raven.k.jackson you always told me you wanted to go out young so you can get that love you deserve from others and be a legend. But what about your family baby what about me? you left my heart so empty and broken lifeless alone. And no matter what they say or what you say I’m gonna forever feel like it’s my fault. Please y’all pay attention to the signs of depression or mental health.”

Antonio was brought into hip hop by artist L’A Capone who was later killed in 2013. Speaking to DIB Ent, he once mentioned that Capone was a huge inspiration to him.

“I do this sh-t for my brother LA. He was taken too soon. He’s one of the greatest rappers to ever come out of Chicago, period. …Look him up if you ain’t heard of him. If you ain’t heard of him, you sleep. You have been under a rock. I didn’t take it seriously until I lost LA,” he continued. “LA was on his way. He was almost there. He was right there. He took off. That sh*t happens, but it’s the streets. Everyday sh*t. It inspired me to do this sh*t.”